Whaley, Martin among those who pass 'gut check' for UConn men's basketball 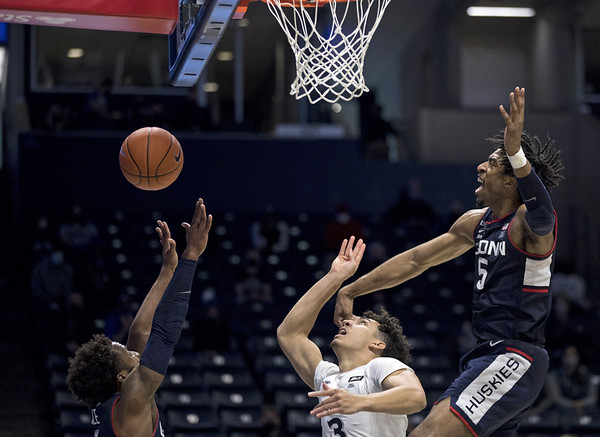 Dan Hurley doesnŌĆÖt want you to die if you play basketball for him.

The UConn coach wouldnŌĆÖt mind a few near-death experiences, however.

And because he was pretty sure his Huskies would be close to dead and buried if they didnŌĆÖt beat Xavier on Saturday, Hurley was hoping his Huskies would summon the courage to look death in the eyes this weekend.

The coach got his wish, as UConn came up with a true gut check of a victory, topping Xavier 80-72 Saturday afternoon at the Cintas Center in Cincinnati.

Entering the game having lost four of its last five games, Hurley broke out a couple of his favorite sporting war stories to help his players understand what he expected from them, including one about former Rhode Island point guard Jarvis Garrett.

A number of his players were nursing minor injuries, and some more serious ones, so Hurley thought it time to regale them with a few tales of basketball heroism.

Garrett lost a couple teeth after an inadvertent head butt from an opponent in a game against St. JoeŌĆÖs during a URI game Hurley coached in 2016. Garrett was forced to wear a mask something like a 1970s hockey goalie might sport - it was the style made famous by Jason in ŌĆ£Friday the 13thŌĆØ is how Hurley remembers it - and couldnŌĆÖt drink water during the games.

ŌĆ£One of the most gruesome, strange masks youŌĆÖve ever seen. He couldnŌĆÖt take it off the whole game it was so cumbersome. HeŌĆÖd have to drink through a straw in one of the holes that he would breath through during time outs,ŌĆØ Hurley said.

Garrett also apparently played with ulcers and alarmingly lost 15 pounds in short order during the season.

UConn forwards Isaiah Whaley and Tyrese Martin, each of whom was nursing a sprained ankle, probably would have felt sheepish if they opted out of playing Saturday upon hearing such a story.

ŌĆ£I just wanted to talk to the players about what needs to be sacrificed,ŌĆØ Hurley said. ŌĆ£You donŌĆÖt necessarily have to play yourself to death. But I tried to give them an example of someone his coach would never forget, that his teammates would never forget.ŌĆØ

If UConn (9-5, 6-5 Big East) goes on to make the NCAA Tournament and perhaps makes a run in the event, perhaps theyŌĆÖll remember Martin and Whaley, not to mention the newly minted Akok Akok, toughing it out to play against Xavier.

Yes, UConn guard James Bouknight missed his eighth straight game while recovering from an elbow surgery, but his absence did not appear to be his own decision and was likely one made by BouknightŌĆÖs surgeon for him. Bouknight warmed up with his teammates, spent much of the game bouncing around the UConn bench, and nearly leapt onto the court in celebration after Andre JacksonŌĆÖs second-half breakaway dunk.

The Huskies scored more points than they had in any game previously in the calendar year, mostly because they made a season-high 11 3-pointers.

Well, Hurley would put the offensive output largely down to toughness, not shooting prowess.

He praised Martin and Whaley as ŌĆ£warriorsŌĆØ - the duo combined for 27 points and 19 rebounds - for playing through some pain.

R.J. Cole was the offensive star for UConn with 24 points and seven assists, and deservedly was showered with praise from his coaches and teammates for not pouting when asked to come off the bench.

But it was another display of toughness that was perhaps just as key to UConnŌĆÖs victory. Akok gave the Huskies a huge boost in his first game back from a shin injury with seven points in a key three-minute span in the first half.

Hurley, using a slightly rugged description of those qualities he values most, says his current Huskies are on their way to meeting his expectations.

ŌĆ£My programs are built on rugged, tough-ass dudes that refuse to lose and will rip the ball out of someone elseŌĆÖs hands,ŌĆØ Hurley said. ŌĆ£WeŌĆÖve obviously got to continue to develop that mentality.ŌĆØ

The Huskies can ill-afford to wait until Bouknight returns to games, though it may be any day now, if they want to make something of their season.

That being said, even the death-defying coach is looking forward to seeing his team healthy and whole very quickly.