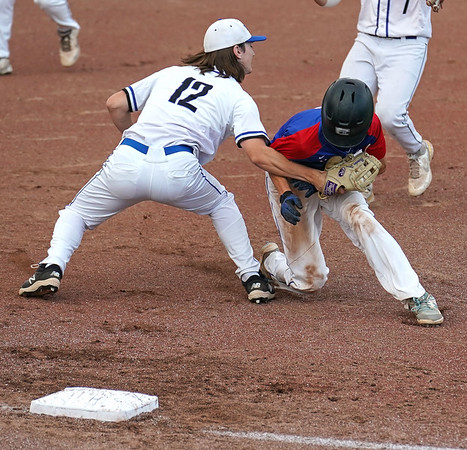 MIDDLETOWN – St. Paul baseball suffered its first shutout of the season following its 8-0 loss to Coginchaug during the Class S final, Friday at Palmer Field.

The top-ranked Falcons ran into UConn bound Kolby Pascarelli on the mound for the Blue Devils, who allowed just four hits in 6 2/3 innings, and kept the high-octane St. Paul offense at bay all game.

“You just got to tip your cap,” Falcons coach Vic Rinaldi said. “They were the better team today, Pascarelli pitched a great game and that’s how the game goes sometimes.”

Coginchaug’s lanky lefty finished with nine strikeouts and four walks in the outing, before Alex Mach got the final out of the game, striking out St. Paul’s Devin Kulas.

“I think we missed an opportunity there in the bottom of the first,” Rinaldi said “We got a leadoff single and momentum right away. I had [Jamie] Leggett bunt for a hit and tried pushing it past Pascarelli there and almost got it past him. He slipped, he fell, he threw from his butt, made a good play. If he throws that ball away it’s first and second with [Ryan] Daniels coming up. Then [Casey] Cerruto hits that line drive right at the shortstop. I think we missed our opportunity there early. If we score a couple runs there in the first inning it might change the way the game kind of went.”

The Blue Devils brought in three runs in the third inning, with an RBI single to right field from Owen Clancy counting as the only hit. A wild pitch and passed ball from Falcons starter Brendan Foley secured the next two Coginchaug runs.

A five-spot in the fourth inning pumped Coginchaug’s lead up to 8-0, highlighted by a two RBI triple from Jeremy Mangiameli and a two RBI single from Pascarelli. A bases-loaded walk from Foley started the Blue Devils attack in the middle of the contest and the junior was pulled shortly after.

“It got away from us in the third and obviously in the fourth, if you go down 8-0 against an arm like this, it’s tough to come back,” Rinaldi said. “I know we have good hitters in our lineup but good pitching is going to shut down good hitting. That’s exactly what happened.”

St. Paul appeared to be making a move in the fourth after two walks from Pascarelli, but Coginchaug’s ace settled down and struck out two more, not giving the Falcons anything to work with.

“You’re up eight runs, if the game is a little bit tighter, it’s a little bit harder on him, but 8-0, walks a couple, he settled right back in and made some great pitches,” Rinaldi said.

St. Paul’s season ends with a 23-3 record and will be returning much of the same lineup that got the Falcons this far. Only Shaun Remillard, Owen Davis, Michael Lodge and Connor Wilson graduate from this season’s squad and Rinaldi hopes the remainder of the roster can use this experience as motivation for next year.

“I told the guys in the huddle, ‘I’m incredibly proud of the season you had.’ It’s obviously not fun to lose when you make it to the final but obviously there was going to be a loser,” Rinaldi said. “Today we were just outplayed, outmatched and Pascarelli was dominant.

“For the younger guys, the underclassmen and the juniors coming back, I told them ‘make sure you watch the celebration and use it as motivation,’” Rinaldi said. “Hang your second place medals on your bed stand and look at it every night when you go to bed. Use that as motivation to try and get us back here next year. We have the majority of our guys coming back and there’s no reason we can’t compete for a state championship next year.”