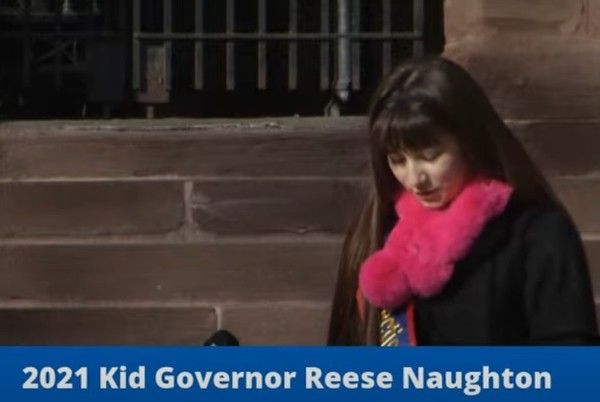 SOUTHINGTON – State and local leaders congratulated 2021 Kid Governor Reese Naughton, of Southington, at her “inauguration ceremony” at the state capitol Friday. She promised to promote positivity and perseverance during the covid-19 pandemic.

Naughton, who attends Zaya Oshana Elementary School, was joined by her parents when she took the podium. She thanked the dignitaries for their words and the CT Democracy Center for “showing kids they are capable of making a difference and that they can change the world.”

“I was inspired to spread positivity when the coronavirus pandemic struck and our world changed,” said Naughton. “Like so many of you I couldn't see my friends, I had to stay at home and I had to get used to wearing a mask. This made me have so many feelings that I realized other kids might be having - sadness, loneliness and isolation. When I had the opportunity to run for Kid Governor, I did it to help others not feel this way.”

Some of the initiatives that Naughton will be taking as Kid Governor include sending cards with positive messages to area nursing homes. She also intends to encourage people to create face masks with positive messages, and to coordinate a poster contest to promote positivity with the CT Democracy Center. She will also encourage students to take care of their mental health by promoting safe outdoor activities.

Lieutenant Governor Susan Bysiewicz said that it was great to see “another smart and talented young lady elected Kid Governor of Connecticut.” She said that she was proud that all of the past winners have been female and encouraged girls watching to run for office.

“Your voice is so important; we need your great ideas to keep moving our state forward,” she said.

Sen. Richard Blumenthal said he was proud to congratulate Naughton during her inauguration.

“I congratulate you for your engagement and involvement in public service; there's no higher calling,” he said. “You're providing a role model for countless other young people your age and older. Oshana Elementary School in Southington is elevated by your success. Thank you for your highlighting pandemic healthcare, mental health, the importance of spreading positivity and taking care of each other.”

Congressman John Larson said that he views civics as so important that he has proposed legislation to make fundamental civics and history classes a requirement for high school graduation. He congratulated all fifth graders who participated in the Kid Governor contest.

“Thank you so much for providing leadership so we can make it through pandemic together,” he said.

Sen. Rob Sampson said that Naughton being elected Kid Governor was “quite an accomplishment.” She is his constituent, he pointed out, and he said that he looked forward to working with her to make a better Connecticut.

“I admire your platform very much,” he said. “You mentioned mental health and nursing home residents - two things very dear to me. I wish you luck in making changes to those areas and improving the lives of people we both represent.”

Merrill thanked the teachers and parents who supported those students who participated in the contest. She said that 6,000 fifth graders registered to vote for the Kid Governor this year.

“The teaching of civics is fundamental to our democracy,” she said. “Democracy is not a spectator sport - we all participate. That's what this program is all about.”

The program, which began in Connecticut six years ago and is targeted at fifth graders, has also since been adopted in Oregon and New Hampshire.

“We are here because we believe in the value of civics education, standing up for issues we care about, making our voices heard and listening to others,” said Brian Cofrancesco of the CT Democracy Center, who heads the Kid Governor program.