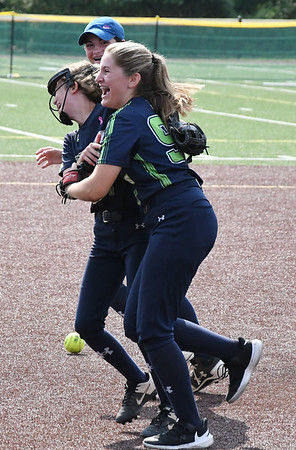 The CT Titans clinched the Nutmeg State 14U softball title Sunday afternoon, winning the gold medal final over DiamondZone (13U) in a 6-5 score.

The Titans jumped on Zone early, scoring four runs in the first inning before an out was recorded.

A bases loaded double by Linea Moore to right-center field drove in Maria Cadianni and Kayla Phelps to give the Titans a quick 2-0 lead. Later on, Sam Giannattasa drove in Hailey Roger and  Moore, scoring two on a two-out double to make it 4-0.

The four-run first inning was huge to take the pressure off her team, said Titans head coach Marissa Morris, whose team entered Championship Sunday with the sixth seed overall.

"Yesterday we did not play our best," said Morris. "We were tough on defense, our bats weren't alive, but I said (Sunday) is a new day and they came out and had solid defense and hit the ball. Defense wins games, but the offense helps."

Zone bounced back in the bottom half of the first with two runs of their own, getting a lead off single from Kaylin Findley, who then scored on a single by Emerson Collins.

Gioia Segui found open field for a base hit to score Collins, making it a 4-2 game through the first inning.

From then on, both pitchers and defenses were lights out as the Titans and Zone stayed locked at a 4-2 score. It wasn't until the top of the fifth, where the Titans scored two on a Sierra Messier single, where the bats came alive again in the game.

Knowing the bats were going to slow down after a quick four-run first, Morris knew four wouldn't be enough against a good, young Zone team unless they stayed relentless.

"The beginning of the game definitely set the tone of the game, but (Zone) was a good hitting team, a young team, and they hit the ball and added on," said Morris. "It was a pretty even game throughout, and we knew we had to keep fighting. The insurance runs always help, but sometimes they don't matter, ... if you don't play tight (defense).

The defense for the Titans nearly slipped up in the seventh, with them still leading by two. After putting a runner on by way of an error, the tying run was able to step up to the plate with a runner on third.

After a Payton Collins out, Zone's Segui put a hard-hit ball through the shortstop to make it a one-run game for Zone.

Alexa Heaphy drew a walk, acting as the winning run, and stole second to put two in scoring position with two outs for Zone's Brooklyn Stanley.

Zone's Brooklyn Stanley then hammered the ball to first, but first baseman Kayla Phelps snagged it, bobbled slightly and secured the ball for the final out of the game to clinch gold for the Titans, who won their first tournament title as a team.

With runners on, Zone head coach Bri Sawicki was hoping her team could find something in between the outfielders and infielders to put a challenge on the defense, but couldn't get it to happen.

"We were looking for a little blooper base hit to maybe bring in two," said Sawicki. "But, y'know, they hit the ball hard and we didn't capitalize."

Hailey Roger was the winning pitcher, while Payton Collins was the losing pitcher. Pitching her way out of jams while trailing all game, Collins helped keep the Titans within reach until the from the first to the final out of the contest, showing poise and confidence with her pitching.

"She's a kid who has a lot of grit and has short-term memory," said Sawicki. "She'll take that first inning and kind of forget about it and go out and shut them down (the rest of the game). She's pretty solid when it comes to forgetting about the past."

The win for the Titans comes after a 10-2 loss to Zone Saturday afternoon. Seeing Zone knock off the top-seeded Zone team it had lost two isn't something Sawicki has never seen before.

"Sunday is a brand new ballgame. We've seen teams go 0-3 on a Saturday and come out and win all of them on a Sunday," said Sawicki "It's all how they come out to play and who they're bringing out on the field."

Winning the battle in the bronze medal game Sunday afternoon was DiamondZone Teal in a 11-6 win over the CT Bombers Teal. Zone Teal was the second seed, while the Bombers were the fifth seed.

In the 12U tournament, the Southington Lightning did not get a chance to play in bracket format due to the Nutmeg State Games cancelling the Sunday competition of the 12U tournament due to weather. The Lightning blew through competition Saturday, winning all three games in 6-4, 12-4 and 8-2 scores. They were scheduled to be the one seed.