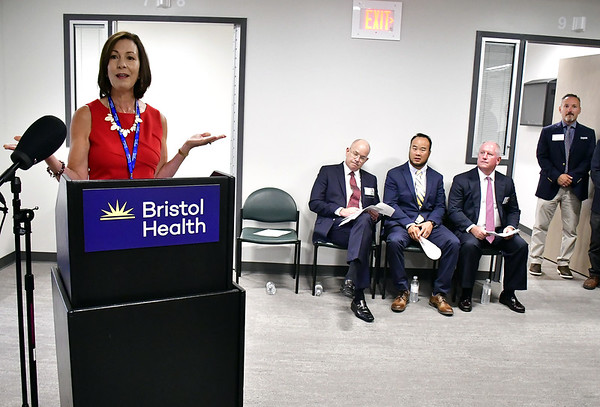 8/9/2019 Mike Orazzi | Staff Kurt A. Barwis, FACHE President and CEO of Bristol Health, during the ribbon cutting for behavioral health unit at Bristol Hospital on Friday morning. Buy this photo

BRISTOL - Bristol Hospital on Friday unveiled its new 10-bed Emergency Center Behavioral Health Unit, an addition that is expected to meet one of the greatest needs of the community: Mental health and substance abuse.

“This unit, to me, along with the senior behavioral health unit, means so much more than just the bricks and mortar you see,” Kurt Barwis, president and CEO of Bristol Health, said during the ribbon cutting. The event celebrated the completion of the first of three phases of the hospital’s Emergency Center Project.

Friday’s event highlighted the new 2,700-square-foot, locked behavioral health unit; a project Barwis said would not have been possible in years past.

“So if you look at the data, you can see substance abuse and mental health issues are really, by far, one of the greatest needs we have,” Barwis said.

“There’s a tremendous awareness and recognition that really didn’t happen 13 years ago, when I got here,” the president and CEO continued. “I think back then I would probably say that a lot of people were afraid to actually highlight some of these issues because it may be, in fact, a black mark on our community.”

“And unfortunately, with that kind of approach, you can’t get people together to solve problems.”

Today however, Barwis said, the hospital has a close relationship with the mayor’s office, the police department and other city leaders in an attempt to address mental health and substance abuse issues.

Dr. Andrew Lim, medical director of the emergency room, said the new unit is safer for both patients and staff. Instead of being in a situation where a patient experiencing a psychiatric crisis is brought to the hospital and has to be restrained in the hallway until there is more staff or available space, they can be brought to a safe, soothing room.

The new unit not only allows the patient to avoid an environment that can be stimulating and make matters worse, but it also frees up space and staff for other patients of the emergency room.

“The benefit is really to our entire emergency room community,” Lim said.

Lim also noted that this is the first time Bristol Hospital will be able to start patients immediately on medication to assist in their detoxification, such as Suboxone. Lim said hospital officials are working with both the mayor’s office and police to try to get addicts help rather than throw them in jail.

“So the overall plan is that, when the patient presents either by police, or through our front door or by EMS, and they either present in overdose or want help with detox, we can get that ball rolling in that moment when they’re motivated to seek help,” Lim said.

The benefits of the behavioral health unit go beyond just the immediate impact it will make when it begins accepting patients next week, Lim believes.

“For me it really is a promise of a better future for the health of our community here,” Lim said.

Barwis added that a lot of thought was put into every part of the behavioral health unit, including the chairs that are filled with sand and too heavy for most to lift, the beds that are bolted down and the plexiglass that is nearly impossible to break. These are all designed to keep patients who may want to harm themselves safe.

Even the indigo paint on some of the walls was meticulously picked out, as the color is known to have a soothing effect on people, Barwis said.

“Every part of this unit has been thought out,” Barwis said.

The other two phases of the Emergency Center project will include adding additional bed spaces and a new patient entrance and registration area. Hospital officials are hoping to complete these two undertakings by December 2021.

The entire endeavor is projected to cost the hospital $5 million. Mary Lynn Gagnon, executive director of the hospital’s development foundation, said she and her team have already raised over $3.6 million.