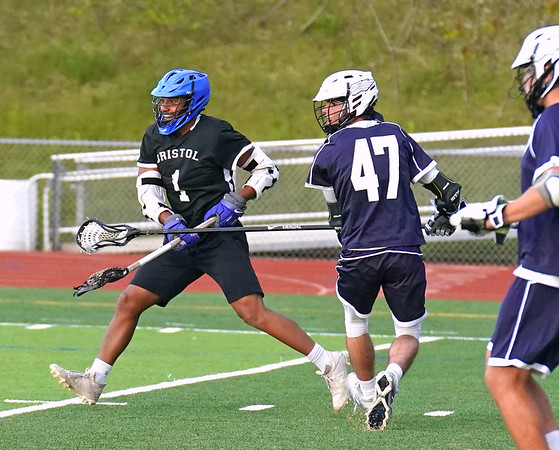 BRISTOL - The Bristol co-op boy lacrosse team took on one of its biggest challenges of the season Tuesday, hosting undefeated Wethersfield.

Playing in just their fifth game of the season, the inexperienced Bristol team fell 16-5 to the surging Eagles whose offense dominated possession for much of the contest. Junior Andrew Spina led the Bristol scoring with three goals in the game while sophomore goaltender Max Stavens notched fives on a day when he faced an onslaught of shots.

“We knew coming out that this was going to be one of our tougher games so we figured now is the time we get to really test what this new program is all about,” senior captain Jeff Taillon said. “I think we were able to hang strong with them and I thought we did pretty well on all sides of the ball. I thought we had a lot of heart and I’m definitely excited from this performance on with how we’re going to do for the rest of the season.”

Bristol scored its first two goals fairly quickly as Spina was able to convert on a pair of his early shot attempts. The game was all Wethersfield from that point on, however, as Ethan Rocheleau scored three goals in the first quarter to help the Eagles build a 5-2 lead after 12 minutes.

“They were just able to see our key dodgers right away and that’s how it goes,” assistant coach Logan Geller said. “We tried some new things throughout the game, but they weren’t working as well.”

Wethersfield quickly adjusted to what Bristol was trying to do offensively and was very effective at shutting it down for the vast majority of the game. Once Wethersfield’s defense established control, that allowed the offense to control the tempo of the game and the Eagles created nearly every scoring opportunity they wanted.

“That team played really well together and knew what each other wanted to do,” senior captain Jack Stavens said. “When you can do that and be on the same page as everyone else on your team, that really can boost your team even if you’re not the most skilled or the biggest guys out there.”

Bristol struggled controlling the ball and building attacks on offense while Wethersfield continued to score. Wil Bankowski drilled two goals early in the second quarter to complete a hat trick as the Eagles took control and led 10-3 at halftime. D’Andre Wiggins broke Bristol’s scoring drought of more than 10 minutes by scoring his team’s only goal of the second quarter on an individual run from the right side.

“I thought we did a great job with special teams, they had two two-minute penalties and we were able to fend them off for a while,” Geller said. “We were doing a great job with putting the ball on the cage and making the goalie make a save.”

Nathan Shorette added a goal for Bristol in the third quarter and Spina was able to finish off his hat trick with the only goal of the fourth quarter for his team.

Up next for Bristol will be a road matchup with Middletown on Thursday at 6 p.m.