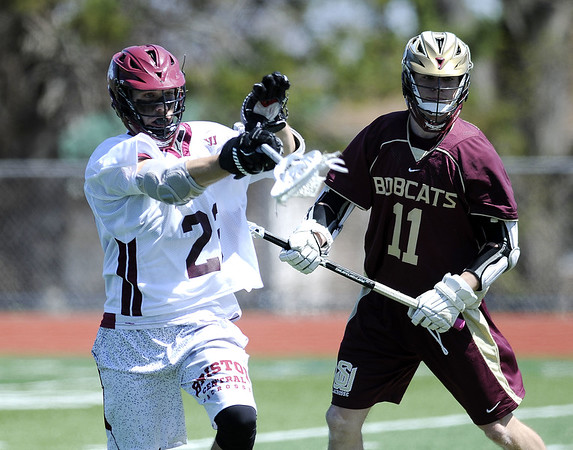 Hildebrand, McLean-Byrd and Grasso are the first three all-conference players in the four-year history of Felician men's lacrosse.

"All three of those guys had tremendous years and deserve this recognition," said Golden Falcon head coach Brendan Bonacum. "These selections show that the program is continuing to take the steps we want it to going forward."

Hildebrand, a 6-foot, 185-pound defenseman, has been with Felician since the program's inception. He started all eight games this season, recording 20 ground balls and four caused turnovers.

"I'm quite ecstatic," Hildebrand said. The Bristol native is a 2017 graduate of Bristol Central, and is currently the leader in caused turnovers at Felician with 22. "The addition of (defensive coordinator) Jack Wilson has been great for myself and the team as a whole. He's been pushing us toward excellence since the fall and we've seen that hard work pay off."

McLean-Byrd is a 5-foot-8, 200-pound faceoff man who was elected All-CACC in the specialist category. He went 122 for 177 from the faceoff spot this season, a 68.9-percent rate, and sits second in the conference with 68 ground balls. He also scored a goal.

McLean-Byrd, who on three occasions was chosen to the U.S. Intercollegiate Lacrosse Association Division II Team of the Week, is Felician's all-time leader in faceoff wins (337) and ground balls (189). He is a 2018 graduate of Mount St. Michael Academy in Bronx, N.Y.

He sits third in the CACC in goals. Grasso tallied a program record nine goals during an Apr. 13 victory at Post University. He is a 2019 product of Islip (N.Y.) High School.

"It is great to see Cody finally getting the recognition he deserves," Bonacum said. "He is our quarterback on the back end and routinely takes the top matchup. Taj continues to rewrite our record book, and it has been great to see him work with our new assistant coach Will Mahon to evolve his game. Robbie, in just eight games, showed he has the ability to be a game-changer for us on offense. We are excited to see what they can all do in a full season next year."

Felician completed 2021 with won-lost records of 2-6 overall and 1-3 in CACC action.