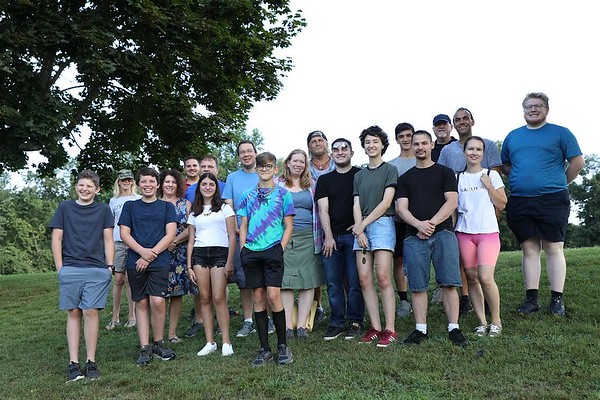 BRISTOL – A short film, written and produced by city resident Douglas Haddad, will be screened for the first time on April 29 at Henry James Memorial School in Simsbury, where he teaches.

Haddad, a CCSU graduate, will premiere the film, "Butterfield", at a "Red Carpet Movie Night" April 29 from 6 to 9 p.m. at Henry James Memorial School in the recently renovated auditorium. The 15-minute film features the talents of five Simsbury middle school and high school students and three teachers, including Haddad. It was filmed primarily in Mills Pond Park in Canton this past August.

Haddad said that the film was created to showcase the new film club that he was starting at the middle school.

"We had school plays and music concerts but we didn't have a film club," he said. "I thought that, once a year, we could produce a short film. This film will be shown to next year's film club."

Haddad said that during the pandemic, he wanted to create a film which was "uplifting, transformative and hit at the core of human existence." He received the local, district, Kathleen Magowan Grant as well as a grant from the "Fund for Teachers" to produce the film.

"With these, I was able to get state of the art equipment," said Haddad. "I also got a good education at The New York University Tisch School of the Arts. I took a one-year intensive film and TV course which gave me the skills to develop and produce the film. We auditioned students and filmed over the summer."

Haddad is the author of “The Ultimate Guide to Raising Teens and Tweens” and said that he previously acted and wrote screenplays when he was growing up. This film will be his debut as a writer and director.

Haddad said that producing the film made up for the fact that the school he teaches in wasn't able to have their usual school play last year due to the pandemic. Many of the youths involved told him that the experience helped them to make new friends along the way as well.

Haddad anticipates that there will be a lot of interest Monday when he tells students about the premiere of the film during the morning announcements.

"We had six school play performances for Frozen, Jr. at our school this year, which all sold out," he said. “I am hopeful that the community and the students will be very excited about the upcoming red carpet movie premiere night.”

"Butterfield offers a unique and uncharted perspective, underscoring the message that we are never alone," he said. "Anyone and everyone who has suffered the loss of a loved one, depression, anxiety, bullying, feeling unaccepted, misunderstood or blatantly outcast can empathize with the film’s hero Corbie Butterfield and his journey. As fate would have it, Corbie’s chance encounter with a stranger on a park bench brings forth a new awareness about “spirit guides” and how they reveal themselves in our daily lives, especially during times of uncertainty and great change."

Haddad said that the original title of the movie was "The Fox and the Butterfly" - derived from animals that appear as spirit guides in the film.

"The fox represents strength during times of uncertainty and change and the butterfly also represents change and metamorphosis," he said. "As one of the characters on the park bench says in the film, 'if you wish to be acquainted with the butterflies you need to learn how to rise above a few caterpillars.'"

Haddad said that one of the main themes of the film is "that you are never alone."

"There are people that are there for you in the physical world and there are also those who have passed on watching out for you in the nonphysical realm acting as guides," he said.