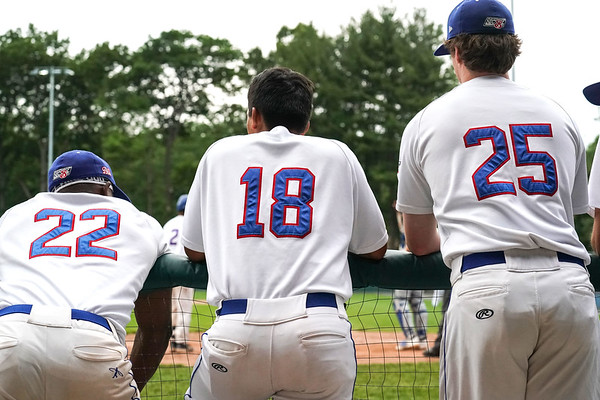 From left, Mark Coley, Dom Agron and Jack Moore watch from the bench for the Blues earlier this season. | Dan Heary Buy this photo
Published on Wednesday, 18 August 2021 19:05
Written by MATT HORNICK

BRISTOL - The Bristol Blues entry into the New England Collegiate Baseball League came a year later than expected and the results were not what anyone in Bristol wanted to see.

The Blues finished with a 12-29 record, which was the worst in the league and were at least five and a half games behind every team in their division. Bristol split its first two games of the season before losing nine in a row, which put the team in a hole it failed to escape from.

“We lost a lot of games early and that definitely hit us hard,” interim coach Jordie Scheiner said. “We lost a lot of games because of errors and because of poor pitching. Guys couldn’t throw strikes and then when we pitched well, sometimes we made a couple of errors that would give up two, three or four runs. That changed how we coached the game at that point. If you pitch well and you play defense, you give yourself a really good chance to win no matter your offensive numbers. When you don’t do that, it makes it much tougher to win baseball games.”

Joining the NECBL offered the Blues both more challenging competition and a greater pool of talent to recruit from, but Scheiner believes the team struggled in preparing for and adjusting to the moving parts of the summer league season. Amid injuries, the MLB Draft and the college baseball schedule, the Blues preseason lineup saw various evolutions by the time the season was in full swing.

“We’re in a different league and obviously there’s a different talent pool,” Scheiner said. “The original team we were planning to have on the field on opening day, I think that team was very good competitively. But obviously not all of those kids showed up and that’s something we have to plan for.

“If we have our second string guys in, we want those guys to be just as good. By the end of the season we lost a lot of arms and a lot of position players. From my personal perspective, I need to do a better job of making sure that I know when guys are leaving so I can put the best team on the field.”

A new playoff format put Bristol in the NECBL postseason despite its struggles in the regular season. A one-game playoff against the Valley Blue Sox ended with a 5-0 loss and capped off the 2021 season.

The Blues’ best stretch came in the middle of July when they won eight of 10 games, highlighted by five in a row with a pair of wins over the first-place Martha’s Vineyard Sharks. Consistency is one of the hardest parts of managing a successful baseball team and this was the stretch where Bristol had the most rhythm.

“The big difference there was we were playing clean baseball,” Scheiner said. “Our pitchers were throwing strikes, we had timely hitting, we were taking quality at bats. A couple of those games we would put up eight or nine runs, but a few of those were two or three-run ball games where we didn’t have many errors, if any. I think that was probably the biggest factor.”

Like all college summer league teams coming off of a difficult season, the Blues have the benefit of starting fresh every season. Picking up knowledge and experience from their first NECBL season will be crucial, but no one seems worried about making a pattern of this year’s result.

“We had a lot of highs and lows,” Scheiner said. “Obviously, it was not the result we expected or wanted. We’re used to winning in Bristol and anything less than that is definitely a disappointment. I did see a lot of personal progressions in a lot of our players. Guys that started the season not throwing a lot of strikes or didn’t have confidence, or were making errors, or taking bad at bats, as the season went on and they got more work in, they became more comfortable and they definitely improved.”