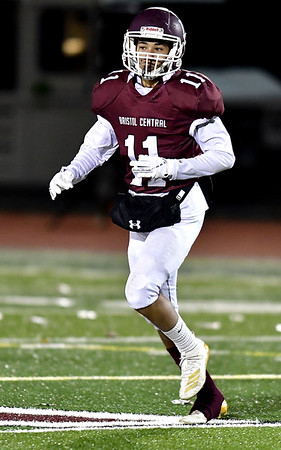 BRISTOL - After losing his final high school football season, Bristol Central senior Eli Rodriguez was able to take advantage of the winter season as a member of the boys basketball team.

But that did not mean his time on the gridiron was over.

“That felt good,” Rodriguez said. “I’m happy to follow my dreams to the next stage playing college football. That’s what I always dreamed to do, so I’m just going to go there with a good mindset and get to work.”

Rodriguez will join the secondary at Curry, the same position group he played for the Rams. He and those around him believe his work ethic and drive were what propelled him to being able to play at the collegiate level.

“I’m happy for him,” Bristol Central head coach Jeff Papazian said. “He’s an extremely hard worker, a kid who has matured over the years and put himself into a position to be able to do something like this. Especially considering the circumstances surrounding this past season, to be able to get a shot to continue to play the sport he loves, I think that’s a pretty nice testament to the work he’s put in over the years with us.”

Papazian added that Rodriguez has a variety of tools, both physical and mental, that will ease his transition to the next level, especially after not playing tackle football in almost two years.

“He’s coachable, he understands his role as it relates to the team goals,” Papazian said. “I think just the positive attitude, his desire and his love for the game when he does get there.”

“[Rodriguez] competes,” he added. “He’s not afraid of a big matchup. He’s got good athleticism. He’s got a tough mindset and mentality that I think are his strongest points. He’s not going to shy away from competition.”

Rodriguez was in contact with a handful of schools, but saw Curry as the best option for him. Now that he is committed, he is now focused on getting some playing time as soon as possible.

“It’s really important because football is a big factor in my life,” Rodriguez said. “It changed me in so many ways and I’m just happy to be able to go play on the next stage. I want to be a starter and I want to be the best I can be, so I put in extra work when nobody is looking.”