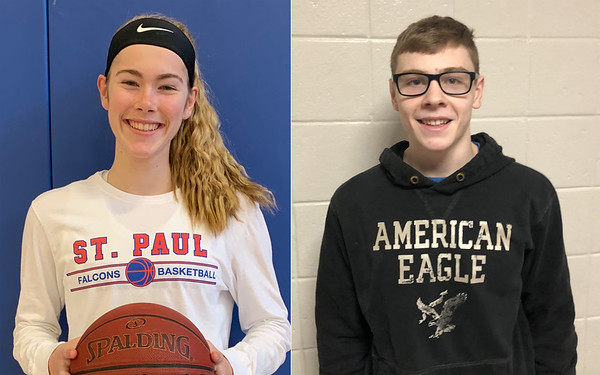 Two senior captains with family backgrounds in the sports they compete in are todayâ€™s Athlete of the Week picks: Olivia Heslin of Plainville, a small forward for St. Paul girls basketball coach Joe Mone; and Trent Thompson, who wrestles at 113 pounds for Bristol Eastern coach Bryant Lishness.

Heslin, the daughter of Jodi and Robert Heslin, an All-Press selection from last season, shares the team captaincy with Jenessa Gonzalez and Jade Udoh, two of the leading scorers in the NVL.

Heslin is often the teamâ€™s third-leading scorer, while also rebounding and recording assists. She has been a steady presence in helping the Falcons rank No. 2 in Class L at 18-2 coming into this week.

â€śLiv is one of the hardest working kids weâ€™ve had in our program,â€ť Mone said. â€śIâ€™m so proud of her for the work she put in to become a good player. She practices and plays hard and is a great role model. Iâ€™m so lucky to have the privilege to coach a person like Liv. She truly embodies what St. Paul basketball is all about.â€ť

Heslin talked about the teamâ€™s improvement this year.

â€śCompared to last year, I think our team chemistry has grown,â€ť Heslin said. â€śI think we are all close and itâ€™s evident in the games as we play off each other. We definitely want to make a run in both the league and state tournaments. We came up a bit short last year in the [Class S] semifinals, but hope to prove something in Class L.â€ť

Heslin comes from a family of athletes.

â€śMy mom [Jodi LaLonde] played basketball and soccer at Lewis Mills,â€ť Heslin said. â€śMy dad was a big runner at Plainville High School. They always pushed me to be the best I could be in academics, sports and in general.Â

â€śMy uncle Neil played basketball here for St. Paul and uncle Bryan played for Bristol Central. Basketball is always the main topic at all family gatherings and it was my turn to take on the sport.â€ť

As far as next year goes, sheâ€™ll be attending the University of Saint Joseph in West Hartford to study elementary education and play basketball.

Thompson, the son of Dave Thompson and Sheri Mazzola, is also an integral part of a highly-ranked team. Bristol Eastern won the last three Class L titles and was ranked No. 5 in the state when it beat crosstown rival Bristol Central on Wednesday, a team which was ranked No. 7.

It was a memorable match-up for Thompson, because he came out a winner in lifting his high school career mark to 100-19.

â€śIt was good, I had a very short match, it was seconds,â€ť Thompson said. â€śI was confident going into the match. It felt good to get the win.â€ť

â€śTrent has been a huge part of our programâ€™s success,â€ť Lishness said. â€śHe has been a valuable talent all four years, but had to bide his time his freshman and sophomore years when he was behind Bryce Beebe and Jordan Champagne. To reach 100 wins in two years as a varsity starter goes to show you how talented he is.

â€śHe is a great kid and a great captain. His work ethic is phenomenal. He trains year-round and has very high goals, which are totally within reach. We have three captains this year, but this is definitely Trentâ€™s team. He is our leader.

â€śIt is no surprise how good Trent is. He comes from a wrestling family and has been on the mat since he was in diapers. I am very close to his father and I love it that I can say I have been in his corner since he started wrestling. Itâ€™s been an honor to coach him.â€ť

And like his coach said, Thompson has set high goals.

â€śMy goal is to win the New Englands,â€ť Thompson said. â€śI came in second at Class L last year and third in the State Open. I lost in the blood round, the round before placing, a tough match. I wrestled at 113 pounds, but Iâ€™m going 106 at states. I just have to watch what I eat.â€ť

Wrestling is a family thing in many ways.

â€ś[Lishness is] like a second father to me,â€ť Thompson said. â€śHe and dad were in charge of the Gladiators when I started out.

â€śDad wrestled and he [later] coached the 1997 Bristol Eastern team to the Class L title. He also wrestled a little in college. My brother [Zach] wrestles for the University of South Maine and heâ€™s a senior captain at 157 [pounds]. He was good at Bristol Eastern, too.Â

Thompson plans to study art and animation next year in college with thoughts of wrestling, and that would preferably be at the Div. II level, otherwise Div. III.