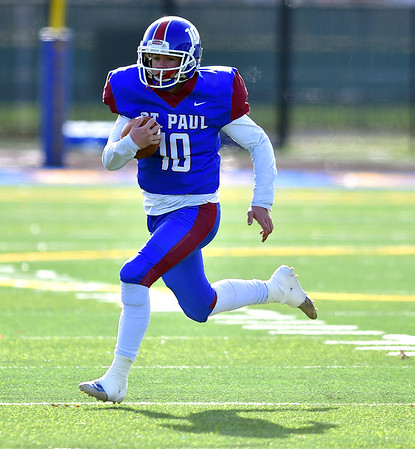 BRISTOL - The 2019 football season may not have gone the way St. Paul hoped but they were able to finish on a strong note.

The Falcons celebrated senior night by posting their second-highest point total of the season and defeating Oxford 37-20.

The first quarter was dominated by Oxford which opened the scoring on the first drive of the game traveling 73 yards in six plays. Quarterback Cayden Mitchell connected with Pat Mucherino for 45 yards on third down to extend the drive and the Wolverines on the 15-yard-line. Mitchell finished the job by himself on the next play to put Oxford on the scoreboard first.

After punting on their next possession the Wolverines started their third drive from St. Paul’s 30-yard-line and only needed three plays to score. Mitchell followed an incomplete pass and a run for no yards with a 30-yard pass to Mucherino who jumped over the Falcons’ defender in the end zone to make the catch.

The Falcons struck back on their ensuing drive and needed barely more than a minute to do so. Quarterback Brycen Kennedy scampered for a 61-yard score to give the Falcons their first points. A successful two-point conversion brought them within five points.

“We run behind our linemen. Those five boys are the toughest guys I know, we couldn’t run our offense without those boys they really picked it up. Once we saw we were down 13-0 we [said] ‘This is our senior night, it’s the night before Thanksgiving this is a huge game.’ My running backs, my line, I couldn’t do anything without those boys, it’s all on them.”

St. Paul took its first lead in the second quarter after starting with good field position on the Oxford 39-yard-line. Max Peruta capped off the six-play drive with a three-yard run to give the Falcons a one point lead.

“I think it was just a matter of figuring out what they were trying to defend,” Kelly said. “They were defending the perimeter more so wanted to go inside with it.”

The Falcons forced a three and out on Oxford’s next drive and quickly added to their point total. They moved 50 yards in six plays and never faced a third down en route to a four-yard touchdown run from Isaiah Connor.

A pair of long drives from St. Paul ate up most of the third quarter clock and the Falcons started the fourth quarter with a two-yard touchdown run from Connor to give them a 17-point lead.

“It felt good,” Connor said. “I’ve been waiting for a long time to score those touchdowns.”

The Wolverines’ attempted comeback started with a kick return that put them in St. Paul territory and ended with a touchdown pass from Mitchell to Ethan Stella-Mackie on fourth and goal from 15 yards out. This was the first time all season that Oxford scored 20 points.

The Falcons delivered the final dagger with 2:38 remaining when Kennedy connected with Erik Evjen for a 14-yard touchdown pass.