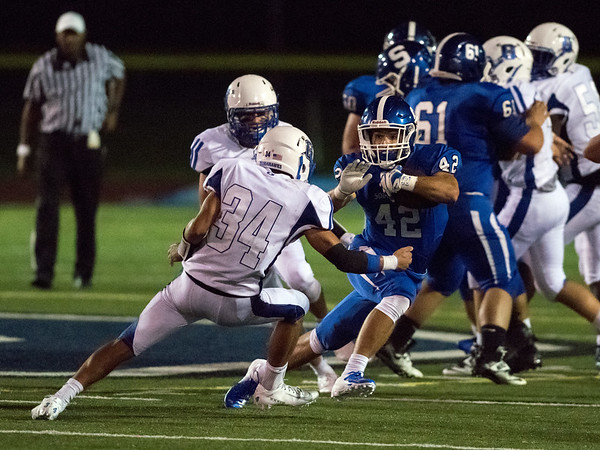 SOUTHINGTON - The Southington football team has had Week 2 circled on its calendar since the summer.

And now that that week is finally here, the Blue Knights couldn’t be more excited. After all, it’s hard not to be when a regular season meeting with Darien awaits Friday night.

“This is always a fun thing for coaches and players,” head coach Mike Drury said. “I knew going into the Football Alliance last year, we figured we were going to get one of the big teams from the FCIAC and we’re excited for that. This is good for our program, good for our guys and our coaches. It’s something we’re looking forward to in the future as well.”

Southington-Darien has always been a premier matchup involving two of the top programs in the state, even if the results the past two meetings - in the 2015 and 2016 Class LL semifinals - have ended in lopsided fashion for the Blue Knights. Southington lost those games by a combined score 87-14 and the rest is well versed. The Blue Knights (1-0) haven’t been back to the state final since 2014 while the Blue Wave (1-0) went on to win three straight LL championships before Greenwich took the crown last season.

But Southington’s players are confident this time around will be different.

“They’re a really good team, but so are we,” said Blue Knights senior receiver Carter Uhlman, who had four catches for 70 yards and a touchdown in a Week 1 rout of Conard. “We feel like a lot of people are doubting us because of those previous matchups. But [Darien is] not the same team [that won those previous meetings] we’re facing. None of those guys are on that roster. Same with our team. We have a lot of guys who have been stepping up.”

Last week against the Chieftains, Southington totaled 434 yards of total offense and seven touchdowns in a 38-7 win and will be looking for a repeat performance on Friday. It will certainly be helpful considering the Blue Wave are coming off a dominant Week 1 showing themselves with a 42-0 rout of Fairfield Ludlow.

Darien’s defense finished that game with five sacks and three interceptions and features a number of playmakers are the different levels. Michael Minicus, Jackson Peters and Austin Dehmel anchor the secondary, while defensive end Will Bothwell is the mainstay up front. There are also linebackers JH Slonieski and Sam Wilson, who are able to play the width of the field. Last week, Minicus, Wilson and Slonieski came away with interceptions, while Bothwell tallied 1.5 sacks.

“Offensively for us, we have to win the battle up front,” Drury said. “That’s what we have to do. We have to be able to establish a balanced attack against them. [Darien is] opportunistic on defense. They know their assignments and execute well. They’re going to be a very good opponent.”

Controlling the clock and being multidimensional will be key for Southington. Against Conard, the Blue Knights ran for 292 yards, including 173 yards and three touchdowns from Dillon Kohl, and threw the ball just 17 times, 16 of which came from starting quarterback Brady Lafferty.

The Blue Wave, much like Southington, will look to spread the ball around when they’re on offense.

Peter Graham, Darien’s quarterback this season, completed 13 of his 20 passes in Week 1 while connecting with seven different receivers. Peters was the leading wideout with three catches for 60 yards. Sean Gifford caught four balls for 41 yards and Graham’s lone touchdown pass of the night. Will Kirby is the team’s main tailback, although he had a quiet season opener with just 28 yards and a touchdown on only eight carries.

That means the Blue Knights will have to be prepared to play in space.

“We have the best offense in the state and going against them every day in practice has helped a lot,” Casella said.

Now, Southington just has to prove this meeting against Darien will be much different than the last two. It might only be the second week of the season, but what better gauge than against one of the top teams in the state?