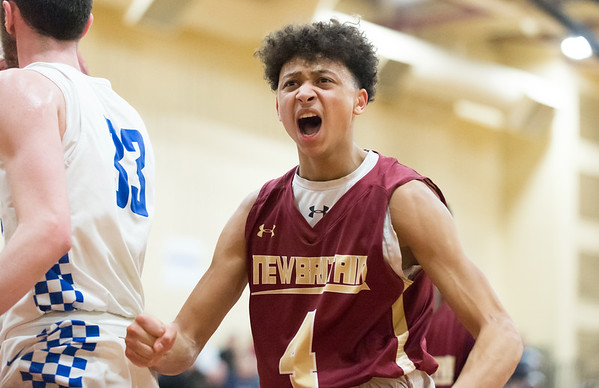 New Britain basketball defeated Glastonbury 56-53 in state semifinal game to advance to the championship game to be played this Sunday at the Mohegan Sun Casino. Maurice Turner (4) reacts after scoring to give New Britain a 46-43 lead in the 4th quarter. Wesley Bunnell | Staff. Buy this photo
Published on Friday, 15 March 2019 21:28
Written by RYAN CHICHESTER

NEW BRITAIN - The New Britain boys basketball team is one win away from its first state title in 69 years, and the Hurricanes aren’t about to let a No. 1-seeded opponent in Waterford shake their confidence heading into Sunday’s Division II state tournament final at Mohegan Sun Arena.

“Give credit to the No. 1 team in Waterford,” senior Kaiyon Gunn said of Sunday's 6 p.m. matchup. “They’re very good, but now that we’re here, we have a chance to win.”

“I feel like we’re underrated in this state,” senior Bryan Thompson said. “We took that as motivation. We knew what we were capable of.”

The Hurricanes can hang onto their underdog label for one last game, as the top-seeded Lancers and their 22-1 record await in Sunday’s championship game in Uncasville, marking the third consecutive tournament round that New Britain will face on of the top three teams in Division II.

“You don’t draw it up that way, but it happened.” Hurricanes head coach Kurt Reis said of his team’s tough road to a championship, one that his group has survived so far. “We’ll have to do what we typically do. We have to play well to beat them. They’re very good.”

The Hurricanes (19-5) and Lancers haven’t met yet this season, but now have a pair of common opponents after New Britain upset Glastonbury earlier this week. Waterford cruised past the Tomahawks back in December in the team’s fourth game of the season, winning by 16 points, while splitting two games against East Lyme, a team that edged New Britain by two points back in early December.

Given how long ago those games were, neither team will be studying either of those matchups closely, or the current tournament seedings. Regardless of past or recent success, it will all come down to 32 minutes to decide who gets to hang a banner in their home gym.

“It’s two teams, one game,” Reis said. “You look at [common opponent], but that was so early in the season. That was like three months ago. I don’t put any weight on that game.”

“Their pressure causes a lot of problems for a lot of people,” Bassett said. “They were able to really dig into Glastonbury and expose some of their weaknesses like they’re always going to do. If you beat Glastonbury, you’re a really good team. We have to be ready.”

Bassett hasn’t seen much of New Britain, but has received the bulk of his scouting reports from his players, who faced off against a number of members of the Hurricanes roster in summer leagues last year. Of course, the state tournament final will be a different entity, and despite Waterford’s past success at Mohegan Sun Arena, New Britain hopes to force the Lancers into the same mistakes it has inflicted on almost every opponent so far this season thanks to its press defense.

“The last four wins came from our defense,” Thompson said. “We’re known for our defense. I don’t think [Waterford] has felt pressure like we bring. Maybe they’ll fold under it, you never know.”

The Lancers didn’t fold in their semifinals matchup against No. 4 Manchester on Tuesday night, coming away with a thrilling overtime win after trailing for the majority of the fourth quarter. A big part of Waterford’s win was the stellar play of senior guard JJ Brennan, who dropped a game-high 28 points, including the first four scored for the Lancers in overtime.

The Hurricanes passed their last test in containing a skilled senior guard in Glastonbury’s Aaron Latham, though they had trouble slowing down 6-foot-6 forward Jack Shea at the rim. A similar problem could arise against the Lancers’ 6-foot-5 center Ryan O’Connell, who had 11 points in Tuesday’s win. But New Britain plans to use the same winning formula it has succeeded with since the season began: surprising teams with its immense defensive pressure to force even the most experienced teams into costly mistakes.

The Lancers saw a similar style of play from Manchester in their semifinals match, as the Indians dialed up the pressure and forced Waterford into an early hole. The Lancers were able to fight back and avoid the upset, but they considered the result to be a wakeup call, especially given the level of defense that will be waiting for them in the final.

“Manchester and New Britain are different teams, but they play a similar style,” Bassett said. “We got through a Manchester team whose pressure rattled us a bit, but we’re working on that for Sunday.”

The Hurricanes are working as well, and despite Waterford having played at Mohegan Sun twice in the past calendar year, while having recent experience against a defensive-minded team, they trust their defense to be as active as any other group in the state, and hope the number one seed will be in for a rude awakening come Sunday.

“If we play our best, no matter how poised the other team is, we’ll apply that pressure,” New Britain senior Isaiah Jenkins said. “Pressure breaks pipes. We can beat anybody. It’s all about who plays better that day.”