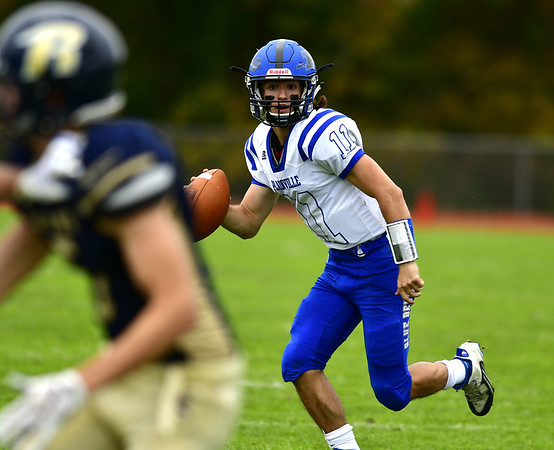 HEBRON - After 24 minutes of play, the Plainville football team was in position to beat undefeated RHAM.

With a 24-0 lead entering the second half, the Blue Devils allowed 32 points to the Sachems, letting RHAM come away with its fifth win of the season 32-24.

“They’re a good team, they are undefeated,” Plainville head coach Tim Shea said. “The fact is we didn’t play 48 minutes. We played 24 minutes, sure great. But you’ve got to play 48 minutes and we didn’t. At times it’s a huge learning and growing experience. You get up and you have to play to win, not play not to lose. At times that happens with high school kids sometimes. We got to play to win and we have to play for 48 minutes.”

In the first half the Plainville defense prevented RHAM starting quarterback Callum Redman from getting anything going in the pass game.

Redman was just 4-of-15 passing and the Blue Devils were getting pressure in the backfield, with three fumble recoveries.

Christian Collin returned a fumble 22-yards for a touchdown in the first half and finished the game with 93 yards receiving as well. Collin and fellow sophomore Dylan Hall both had big games on the offensive end of the field for Plainville. Hall finished with 115 yards receiving and made big catches down the stretch with 82 of his yards in the fourth quarter.

Plainville quarterback Frank Griffin didn’t just find his receivers though. The senior signal caller ran in a pair of scores, a 1-yard touchdown run and a 7-yard touchdown run that he lowered his shoulder on running through a defender.

With the turnover battle in their favor, the Blue Devils needed a strong second half.

It couldn’t have started out any worse for Plainville offensively.

After forcing a punt, the Blue Devils got the ball at their own 1-yard line and one play in Redman recovered a fumble to set RHAM up with one yard to go.

The big 6’5 signal caller rumbled in for a touchdown and with the failed PAT, the Blue Devils led 24-6.

On the next possession for Plainville, the turnovers continued as Collin fumbled and Sachems defensive back Dylan Depersia picked it up and returned it 38 yards for a touchdown.

Another three-and-out for the Blue Devils gave the ball back to RHAM and the pass game started picking up steam finally for the Sachems.

Redman went 3-for-3 on the drive and found Kevin Clark for a 23-yard touchdown pass with 2:59 to go in the third quarter.

After the slow first half passing, Redman threw for 205 yards in the second half on nine completions and two touchdowns.

Redman found Depersia for what went on to be the game-deciding score as RHAM took a 25-24 lead following the 63-yard touchdown pass in the middle of the field.

Another rushing score for Redman put the Sachems up eight points but Plainville had one last chance late in the game from its own 3-yard line.

Griffin was moving the Blue Devils down the field methodically but with 1:25 still to go the senior tried to take a deep shot and it backfired as RHAM’s Jack Bordick intercepted him and eliminated any chance of a score and a chance to tie with a two-point conversion.

“They just made a play, it’s football and that happens,” Shea said. “We’re not going to second guess any of the calls and any of that stuff. When push came to shove they made the play and we didn’t.”

Plainville fell to 2-3 with the loss and RHAM moved to 5-0 to remain unbeaten.