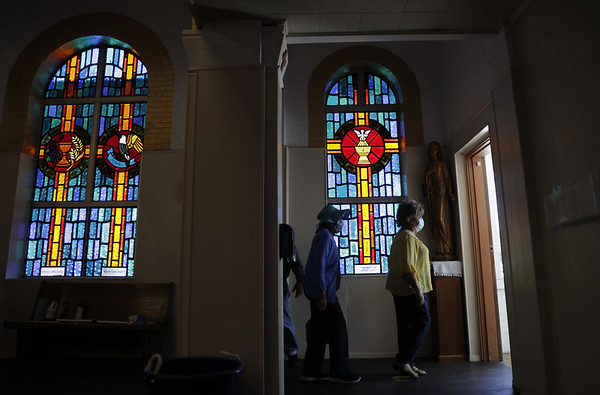 FILE - In this May 19, 2020 file photo, parishioners wear face masks as they file out of an in-person Mass at Christ the King Catholic Church in San Antonio. The Friday, May 22 anticipated release of new federal guidance on resuming in-person religious services during the pandemic comes ahead of a week that was already poised to rattle what’s been a weeks-long national balancing act – pitting the call to worship against the risk of the coronavirus. (AP Photo/Eric Gay, File) Buy this photo
Published on Friday, 22 May 2020 19:33
Written by ELANA SCHOR

NEW YORK - President Donald Trump's declaration that religious services should be "essential" comes at a precarious point in the national balancing act that pits the call of worship against the risk of coronavirus.

Even before Trump's comments Friday, which came alongside the release of guidance for reopening faith organizations from the Centers for Disease Control and Prevention, Christian leaders in several states made plans to welcome back congregants on the week of Pentecost, May 31.

The new CDC guidance could energize houses of worship that might want to reopen their doors, despite evidence of ongoing risk of the virus spreading through communal gatherings. While it suggests steps such as asking congregants to cover their faces and limiting the sharing of worship aids, the CDC document says it is "not meant to regulate or prescribe standards for interactions of faith communities."

Tension over when and how to reopen houses of worship has varied depending on the state, as different areas set their own pace for easing pandemic stay-at-home orders. Trump called for the resumption of in-person religious services repeatedly this week and said Friday that he would "override" governors that did not do so, though it's unclear whether Trump has any authority to supersede state leaders on the issue.

Still, the president's comments come less than six months ahead of a reelection bid in which turnout from his conservative evangelical Christian base could prove critical. Trump suggested on Thursday that friction over the issue was more common in states run by Democrats because "churches are not being treated with respect" by many their governors.

One of those Democrats, California Gov. Gavin Newsom, was warned this week by Trump's Justice Department that the state's phased-in plan to restart economic activity puts an "unfair burden" on worship by not permitting churches to open earlier in the process. More than 1,200 California pastors are planning to restart worship on May 31 despite Newsom's stay-at-home orders, which he has said would likely allow for religious gatherings within weeks.

Among the California pastors leading the call for resuming in-person gathering is Danny Carroll of Water of Life Community Church in Fontana. State officials "don't understand that people of faith need contact, that they need to worship together," Carroll said in an interview. "We're trying to close the gap – thoughtfully, humbly, nicely."

But another pastor involved, Ron Hill of Love and Unity Christian Fellowship, said that he finds "some merit" in Republicans' claims that blue states have a less keen understanding of religion's importance in public life.

"I really find it difficult to understand why they're placing a different rule on the church than on the supermarket, café or restaurant," said Hill, who added that he had not yet decided whether May 31 would mark the reopening of his church in Compton, Calif.

Pastors in other states, however, have already begun outlining plans to welcome back worshippers in person before the month's end. Florida's Rodney Howard-Browne – arrested in March for holding a large in-person service at his church, charges that were later dropped – is preparing to reopen with an outdoor service on Pentecost. Catholic and Lutheran churches in Minnesota have notified that state's Democratic governor that they plan to resume Mass this week, in defiance of his order.

An evangelical pastor who's been a key Trump backer, Jack Graham, plans to reopen his Texas megachurch on Pentecost weekend. Attendees of those services will be required to make reservations, but masks will not be mandated, according to the church's website.

Graham told the Faithwire website this week that Pentecost, considered holy by Christians as the birthday of the church, was a fitting moment for "a kind of rebirth of the church" this year.

The momentum toward restarting in-person worship comes amid new reports of church gatherings spreading COVID-19. A CDC report released this week traced the spread of the virus to 35 out of 92 attendees at two March church events in Arkansas that were attended by two symptomatic people.

"Reopening faith communities, let alone reopening any other faith institutions, is unsafe" given the ongoing threat of spreading illness, said Maggie Siddiqi, director of the faith initiative at the liberal Center for American Progress. "My fear is we will learn the hard way and have to close again."

While Pentecost promises to escalate the number of churches seeking to reopen, many other houses of worship are still expecting to wait until June or beyond to resume in-person services with restrictions aimed at protecting public health. Another prominent conservative evangelical ally of Trump, Pastor Robert Jeffress, said he is eyeing local metrics and could reopen next month.

Speaking before Trump's Friday announcement, Jeffress said his Dallas-area megachurch would be "data-driven, instead of date-driven, when it comes to reopening."

A spokeswoman for the ministry of Paula White-Cain, the pastor who leads Trump's White House faith initiative, said earlier this week that at the moment Pentecost services at her Florida church were slated to be online-only.

The president, however, has projected eagerness to restart religious services. Trump held a Thursday conference call with 1,600 "pastors and faith leaders" to tout the importance of reopening in-person worship, later saying that deeming liquor stores and abortion clinics essential but not worship was an "injustice."

Some governors designated faith gatherings as essential services in their states' pandemic stay-at-home orders, although others restricted them as the virus began to spread.

Ralph Reed, chief of the Faith & Freedom Coalition and another conservative evangelical ally of Trump, said before Trump's Friday announcement that while Pentecost is "an important marker for the church," he doesn't expect most Christian leaders would be "guided particularly by that date" in deciding to reopen.

But Reed lauded the growing push in that direction. "Churches are doing a good job" adapting to necessary public health constraints, he said, "but I do think it's time for the country to reopen."

Associated Press religion coverage receives support from the Lilly Endowment through the Religion News Foundation. The AP is solely responsible for this content.