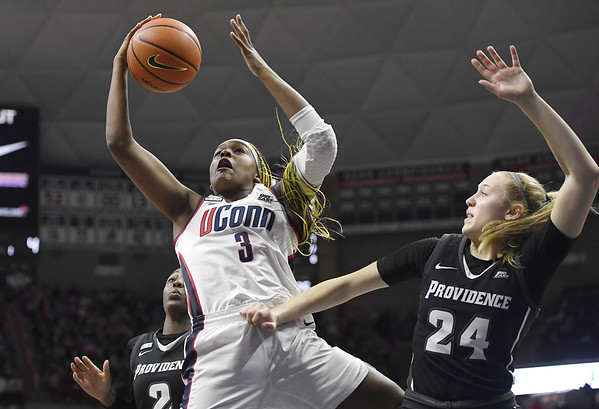 Connecticut's Aaliyah Edwards pulls down a rebound against Providence's Audrey Koch (24) in the first half of an NCAA college basketball game, Sunday, Feb. 27, 2022, in Storrs, Conn. (AP Photo/Jessica Hill) Buy this photo
Published on Sunday, 27 February 2022 20:46
Written by CARL ADAMEC

STORRS -- The UConn women's basketball team's seniors did what seniors are supposed to do Sunday.

It made Senior Day a rousing success.

The Huskies honored Christyn Williams, Olivia Nelson-Ododa, Evina Westbrook, and Dorka Juhasz in a pregame ceremony and they led the way as No. 7 UConn smashed Providence 88-31 before a sellout crowd at Gampel Pavilion to complete the regular season.

"It was definitely a lot of emotions, and it hit everyone when the (senior) video started playing," Westbrook said. "The highlights are going and you hear your name called and you walk out there with your family, it hits everyone. It hit the team, too. After walking past them everyone was crying. They were happy tears.

"It was a special moment for all of us and something we'll take with us forever. Trying to do that then get our minds right for the game was crazy. But we adjusted and did what we needed to do."

Williams, Westbrook, and Nelson-Ododa were escorted to center court by their parents. Juhasz was escorted by the seven non-seniors on the Huskies' roster

The honorees received framed uniforms from coach Geno Auriemma, which UConn has done since 1995. A rendition of the Hungarian national anthem was played in honor of Juhasz, a native of Pecs, Hungary who transferred from Ohio State last year.

"I got really emotional and I tried to hold myself together," Juhasz said. "The players next to me were crying and I was like, 'Guys!.' But I just felt so loved. Not having my family here and then ... I didn't tell them to come walk me out but they said, 'We want to walk you out and be there for you.' It was an emotional moment.

"Then we had to get into game mode."

Williams led the Huskies with 16 points while Juhasz had a double-double of 14 points and 10 rebounds. Nelson-Ododa filled the stat sheet with 13 points, eight rebounds, three assists, and two blocked shots. Her two ejections moved her past former teammate Napheesa Collier into seventh on the Huskies' all-time list. Westbrook had eight points and seven rebounds.

"We'll take a couple of days off," Auriemma said. "Then we'll work on playing better man-to-man defense, rebounding better, things you know that will be huge going forward. To me those are the two things that stand out in every postseason game. If you can do those things the other parts will take care of themselves. That's the focus this week."

Every healthy UConn senior has started on Senior Day since 1992 and Sunday was no exception. The four honorees were joined in the lineup by sophomore Paige Bueckers, making her first start since Dec. 5. It marked the Huskies' 10th different starting lineup in 27 regular-season games.

The reigning Player of the Year saw 13 minutes of action and had two points, three assists, and five assists to no turnovers.

And as often happens, UConn stated slowly on Senior Day as it trailed 4-1 early. But then the seniors made their presence felt.

Nelson-Ododa (6), Williams (5), and Juhasz (5) combined for 16 points and seven Huskies total scored in a 29-0 run that gave UConn a 30-4 lead. Kylee Sheppard made a 3-pointer for the Friars to break the drought but the Huskies responded with the next 11 points -- the first eight by Williams -- to put it far away.

It was 51-10 at halftime. The win was a season-high seventh straight.

Janai Crooms had 12 points for the Friars (11-18, 6-14). The one-time teammate of Juhasz at Ohio State had 27 points on Jan. 30 in Providence's 69-61 loss to UConn at Alumni Hall. Enfield native and Friars' senior forward Mary Baskerville had a day to forget as she fouled out in 6:37 on the court. She had three rebounds and an assist.