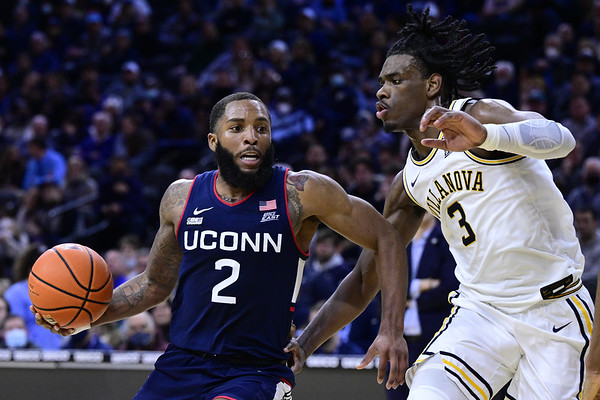 PHILADELPHIA - It‚Äôs not here yet. The UConn men‚Äôs basketball team, despite the strides it has taken in recent years and the resurgence it‚Äôs experienced under coach Dan Hurley, has not quite caught the standard-bearer for excellence in the Big East Conference.

The 17th-ranked Huskies suffered an 85-74 loss to No. 12 Villanova Saturday afternoon at the Wells Fargo Center, their first game against Villanova here since UConn coach Hurley‚Äôs oft-cited proclamation following a narrow defeat Jan. 18, 2020.

Many fans thought it would come this year, and, more specifically, this weekend.

But there remains a gap between the two teams.

The Wildcats, who have owned the conference‚Äôs crown since the breakup of the league back in 2013, continue to lord over the Huskies now that they‚Äôre brethren again.

Hurley on Saturday wasn‚Äôt nearly as defiant in his predictions of future success. And, to be fair, he wasn‚Äôt talking about Villanova exclusively two years ago when he uttered his now famous phrase.

The coach also said on Saturday he isn‚Äôt overly concerned about failing to beat Jay Wright‚Äôs Wildcats yet.

UConn had lost five straight games to the Wildcats and is winless against its old rival since returning to the Big East.

‚ÄúI think any particular team in the league is in our head,‚Äù Hurley said. ‚ÄúI don‚Äôt think there‚Äôs any team we think that we can‚Äôt beat. I don‚Äôt think we came in with like a ‚Ä¶ when you play at UConn there‚Äôs no brand that you play against where it‚Äôs too big for you.

His players largely agree. They say they don‚Äôt see Villanova as some brass ring to be seized; they just want to beat everyone.

‚ÄúWe want to beat every team we play against. It‚Äôs not just Villanova,‚Äù point guard R.J. Cole, who had 25 points in the loss Saturday, said. ‚ÄúI guess Villanova is the standard in this league but we‚Äôre a good team, too. We‚Äôre going to continue to believe in ourselves and come out with confidence.‚Äù

UConn (15-6, 6-4 Big East) has lost consecutive games for the first time this season, though some of that is due to an increasingly difficult schedule. The other part is the Huskies have, to use Hurley‚Äôs phrasing, lost their identity.

In other words: they stunk on defense against Villanova.

‚ÄúYou go through valleys. This is a valley for us. We haven‚Äôt played well. We have to have guys step up. We have to coach better. We have to play better,‚Äù Hurley said. ‚ÄúI still think we‚Äôre one of the best teams in this league. And we‚Äôre going to see these guys again at home.‚Äù

Both the coach and his players insisted after Saturday‚Äôs game they saw largely what they expected from the Wildcats‚Äô attack. There is of course a difference between knowing what is coming and stopping it.

UConn struggled with the latter. Some of it was due to cautious play after early foul trouble.

But in the game‚Äôs decisive run - when Villanova turned a rather tenuous 7-point lead early in the second half to a gigantic 23-point advantage in a matter of five minutes‚Äô time - there were no foul issues to hold the Huskies back.

Yes, much like Creighton did earlier in the week, Villanova got a couple lucky bounces. Star guard Collin Gillespie‚Äôs 3-pointer from the corner bounced three times before dropping in during Saturday‚Äôs decisive run, not unlike Creighton forward Ryan Hawkins‚Äô shot in Hartford four days earlier just before the half that took three caroms before falling, too.

And, yes, the game officials weren‚Äôt exactly giving UConn defenders the benefit of the doubt.

‚ÄúThe outcome had nothing to do with the officiating but I just couldn‚Äôt believe both those guys (Adama Sanogo and Isaiah Whaley) getting some really touchy fouls to start the game,‚Äù Hurley said.

But even with those factors discounted, UConn still wouldn‚Äôt be able to get over the hump against the Wildcats.

UConn fans are still waiting for it to come.