Now a winner, UConn football is going for two 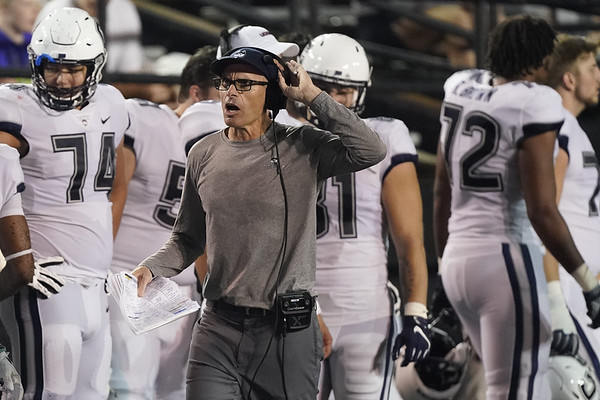 Connecticut head coach Lou Spanos walks on the sideline in the first half of an NCAA college football game against Vanderbilt Saturday, Oct. 2, 2021, in Nashville, Tenn. (AP Photo/Mark Humphrey) Buy this photo
Published on Wednesday, 20 October 2021 18:52
Written by NEILL OSTROUT

STORRS - Now that it has secured its first win in two years, the UConn football team has a new goal in mind: its first winning streak in four years.

The Huskies (1-7), who with Saturday’s 21-15 win over Yale snapped an 11-game losing streak, return to East Hartford Friday to host Middle Tennessee State.

A win over the Blue Raiders would give UConn consecutive wins for the first time since October 2017.

“We came in Sunday and the energy was good. They were locked in,” UConn interim coach Lou Spanos said of the Huskies’ reaction in practice after the initial win. “Obviously we have a short turnaround.”

The short week of practice doesn’t worry Spanos too much, however.

“It’s good to be young. They had a lot of energy,” Spanos said.

As for the veteran assistant coach who earned his first career victory as a head coach? Spanos said he wasn’t exactly taking congratulatory calls all weekend.

“In this business, you don’t have time for congratulations. We’re on to Middle Tennessee. Maybe I’ll hear in the offseason,” Spanos said.

Running back Kevin Mensah is No. 4 on the Huskies’ all-time rushing list yet he is No. 2 on the current team’s depth chart.

In the win over Yale, however, there were signs that Mensah is ready to make a surge back to the top of the two-deep. The senior from Worcester had 58 yards on 12 carries against the Bulldogs. Nate Carter, the Huskies’ starter, had 39 yards on 17 carries.

Spanos has praised Mensah’s work ethic even as his role has been reduced.

“I’m not speculating on what he’s thinking,” Spanos said. “But everyone has a role. And he’s accepted it. … He’s embracing it and he’s maximizing the reps.”

Spanos said Mensah and Carter are battling out in practice this week to see who gets the lion’s share of the carries against Middle Tennessee.

“He (Mensah) had another good day and so did Nate,” Spanos said of Monday’s practice.

Cooking up a win

For the most part, UConn’s pass defense against Yale was outstanding. The Huskies intercepted four passes and if you count all but one of Yale’s completions, they allowed only 131 yards through the air on 53 pass attempts.

Of course, that one other completion was a 60-yard connection from Yale’s Nolan Grooms to Chase Nenad late in the game.

Spanos was asked Monday if he could overlook the defense’s one lapse given the rest of the day’s efforts.

“If my wife was making something good but forgot the recipe and it ended up tasting bad…,” Spanos said with a laugh, not finishing his metaphor, and obviously not accepting the lapse.

This is the third meeting between the schools but the first since 2001.

UConn defensive tackle Travis Jones has been invited to the East-West Shrine Bowl, the nation’s longest-running college all-star game. The game will be played Feb. 3, 2022 in Las Vegas. … UConn had four interceptions against Yale, the first time it’s done so in a game since a 2014 effort against East Carolina. … Middle Tennessee has forced 17 turnovers this season, third-most in the nation. It also has blocked three kicks. … Middle Tennessee has been idle since an Oct. 9 loss to Liberty. … Middle Tennessee linebacker Reed Blankenship has a school-record 364 career tackles.