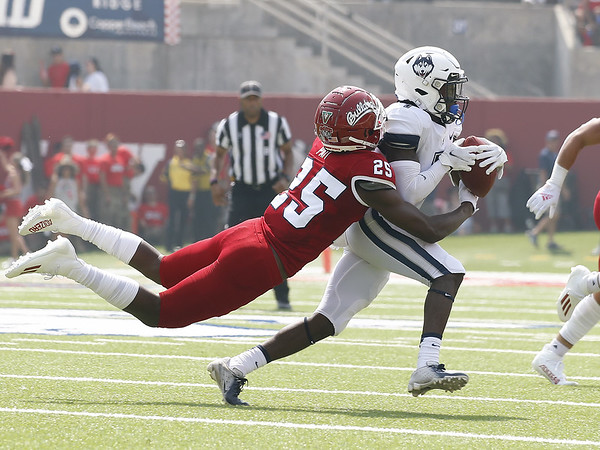 FRESNO, Calif. -- Playing its first college football game in 21 months, UConn was a step behind Fresno State throughout its lopsided 45-0 loss Saturday.

The Huskies entered uncharted waters with their season opener, making the first trip to California in program history. Traveling more than 3,000 miles away from home, they were welcomed to Fresno by triple-digit temperatures on the field by the time kickoff rolled around.

UConn kept pace with Fresno State for most of the first quarter as both offenses tried to establish a rhythm. Yet the Huskies never established anything, due in part to an offensive line that could not hold its own against the Bulldogs’ pass rush.

Fresno State recorded 10 tackles for loss and four sacks, the first of which resulted in the game’s first touchdown.

UConn quarterback Jack Zergiotis barely finished the fake play action handoff when defensive end Arron Mosby barreled down on him. Zergiotis reared back to throw, but Mosby knocked the ball out of his hand, scooped it up and scored.

The strip-sack touchdown was among the lowlights for a UConn offense that mustered 107 total yards, its lowest single-game output since moving to the FBS (Division I-A) in 1999.

Zergiotis passed for 61 yards on 12-for-24 passing. Backup Steven Krajewski finished the game and completed 2-of-6 passes for 11 yards.

UConn head coach Randy Edsall said that despite Saturday’s offensive meltdown, he will stick with Zergiotis as the team’s starter.

UConn did not get much production from its running game either, averaging 1.1 yards per carry for 35 total rushing yards. Running back Kevin Mensah rushed for 31 yards on 11 carries.

The Huskies only crossed midfield three times all game and never reached the red zone in their first shutout loss since a 30-0 loss to Boston College on Nov. 19, 2016.

On defense, where the Huskies ranked among the worst in the country in 2019, the issue wasn’t in the first quarter. UConn forced Fresno State to punt on its first three possessions.

“I thought we executed very well,” Edsall said of the defense’s early performance. “We were where we were supposed to be and we did the things that we had to do. Then we ended up missing some tackles, which hurt us.”

Big plays hurt the Huskies in a second quarter that turned a 7-0 game into a blowout. Fresno State scored 24 points in the second quarter, and quarterback Jake Haener threw three touchdowns. Two of them came on one-play drives.

Edsall said the Huskies aimed to slow the game down against a high-powered Fresno State offense that led the Mountain West in 2020. Missed tackles and lack of execution foiled that plan.

Playing without a few defensive starters did not help UConn either. Two starting two defensive ends, Eric Watts and East Hartford native Kevon Jones, were missing. Chris Fortin, who Edsall said would be UConn’s starting center, did not play either.

“Hopefully we'll get those guys back here sooner rather than later,” Edsall said. “Two of them were injuries, and the other one was just a young person's mistake.”

Edsall said he expects Jones to return next week. Watts could possibly return next week but almost certainly will be back for the Sept. 11 game against Purdue, according to Edsall, and Fortin will likely be back by Sept. 11 as well.

UConn lost starting linebacker Ian Swenson to a foot injury Saturday, and multiple more members on both teams went down with cramps in the sweltering environment.

After staking Fresno State to a 31-0 halftime lead, Haener left the game due to what he described as “a full-body cramp.” By the time he exited, however, Haener had already thrown for 331 yards and three touchdowns.

UConn recorded its lone takeaway against Fresno State’s back-up quarterback Logan Fife. Defensive back Jeremy Lucien intercepted a Fife pass, but the Huskies did not capitalize on it.

Although the Huskies were glad to resume playing, Edsall said there remains a lot of work to be done.

“I told the guys this is just one game, and now we have to improve in every area,” Edsall said. “Again, I have no excuses to offer. We just have to get better in all areas and that's what we're going to continue to work on.”