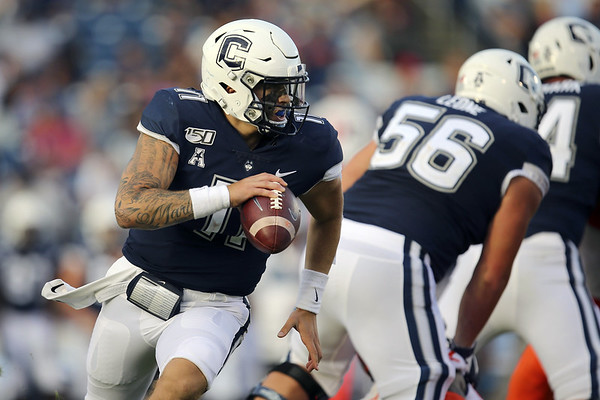 FILE - In this Sept. 7, 2019, file photo, Connecticut quarterback Jack Zergiotis (11) rolls out of the pocket during an NCAA football game against Illinois in East Hartford, Conn. UConn has canceled its 2020-2021 football season, becoming the first FBS program to suspend football because of the coronavirus pandemic. (AP Photo/Stew Milne, File) Buy this photo
Published on Sunday, 8 August 2021 19:01
Written by NEILL OSTROUT

STORRS -- The quarterback situation on the UConn football team is beginning to get sorted out.

Jack Zergiotis, the Huskies sophomore signal-caller from Montreal, appears to be inching ahead in the competition to be the team’s starter. Zergiotis, who played in 10 games for the Huskies in 2019 -- the last season that the program played intercollegiate competition -- worked with the first team during practice Saturday evening.

In addition to Zergiotis’ possible emergence, there was another player who has officially taken himself out of the competition. Redshirt freshman quarterback Miles Foerster has left the team, coach Randy Edsall said, and plans to transfer.

A native of Amherst, Massachusetts, Foerster had not seen action in any games for the Huskies.

Micah Leon, junior who transferred from N.C. State and has yet to play in a game for the Huskies, played with the second team during Saturday’s practice. Steven Krajewski, a sophomore from Macomb, Michigan, who played in four games in 2019, worked with the third team.

Edsall did not acknowledge that pecking order as anything close to an official depth chart, just pointing out that he and his coaching staff are evaluating each of the four quarterbacks constantly.

Saturday was UConn’s eighth practice of the preseason. The team will open the regular season Aug. 28 at Fresno State.

Whoever ends up starting under center in the Huskies’ opener, Edsall is anxious to choose a candidate that won’t make big mistakes. Turnovers were a major problem for UConn in its last season, with interceptions and fumbles by its quarterbacks -- Zergiotis, Krajewski, and Mike Beaudry -- extremely common.

The Huskies believe they can identify the “safest” choice to be the starter during practice this month.

UConn linebacker Omar Fortt, a senior from Stamford, has been impressed with all of the quarterbacks during practice so far.

“We had 1-on-1’s and we had quarterbacks throwing it on a dime,” Fortt said Saturday.

And although it seems unlikely he will start immediately, Fortt says he’s liked what he’s seen from the team’s newest quarterback.

“Someone who I’ve been really impressed with is Tyler Phommachanh,” Fortt said of the freshman from Stratford whose brother Taisun is a quarterback at Clemson. “He’s a Connecticut native. He’s someone I think is going to lead this team to a promising future.”

Whoever emerges from the now four-man race shouldn’t feel overwhelmed, Edsall points out. The Huskies have some outstanding young wide receivers and veteran running backs that can shoulder plenty of the responsibility for making plays, the coaches believe.

“Guys have to understand that you have people who can help you at that position, quarterback, so you don’t have to do it all by yourself,” Edsall said.