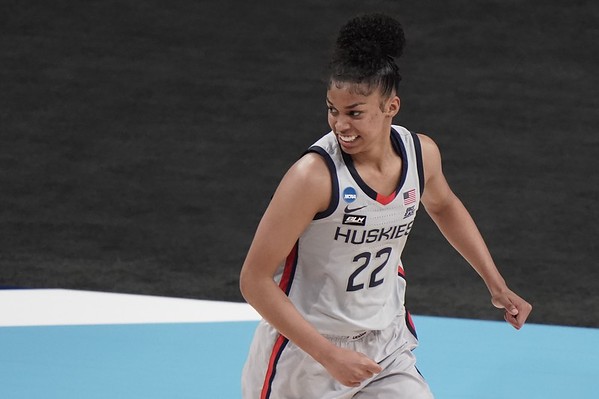 UConn's Evina Westbrook reacts to her basket during the second half of the Elite Eight at the Alamodome in San Antonio. | Morry Gash. Buy this photo
Published on Monday, 12 July 2021 19:47
Written by CARL ADAMEC

The redshirt senior knew well before the deadline her time would be better spent with her Huskies teammates for another year.

‚ÄúOne, I want a national championship,‚Äù Westbrook said Tuesday as the Huskies met the media at the Werth Champions Center. ‚ÄúTwo, it would have been really, hard for me to leave these guys. I didn‚Äôt want that on my chest. I didn‚Äôt feel like I was done yet.

After spending two years at Tennessee and a third sitting out due to NCAA transfer rules, Westbrook emerged as a team leader for the Huskies on and off the court a season ago earning praise from coach Geno Auriemma, his staff, and her teammates. National Player of the Year Paige Bueckers called Westbrook the team‚Äôs Most Valuable Player.

Westbrook felt she had more to give UConn, though she was projected by some to be a first-round pick in the draft.

‚ÄúOur last game just wasn‚Äôt us,‚Äù Westbrook said. ‚ÄúIt was a tough loss, a tough way to go out. But I think we learned so much from it. We did have some really great moments, not only on the court, but off it.

‚ÄúI watched it when I got back home by myself. I really tried to analyze everybody, not just myself. Where did we go wrong? What could we have done better? What was everyone thinking in that moment? Right now it‚Äôs a learning tool for us. Now it‚Äôs time to move on.‚Äù

In her first year playing at UConn, Westbrook averaged 9.4 points, 5.3 rebounds, and 4.3 assists as the Huskies went 28-2, swept the Big East regular season and tournament titles, and advanced to their 13th consecutive Final Four. She reached the 1,000-point plateau for her career in UConn‚Äôs Sweet 16 win over Iowa when she just missed a triple-double, finishing with 17 points, nine rebounds, and 10 assists.

The Salem, Oregon native played and started all 30 games and averaged 30.7 minutes per outing. It wasn‚Äôt always easy following major surgery on her left knee on Dec. 31, 2019. But she persevered.

‚ÄúIt was actually tougher mentally,‚Äù Westbrook said. ‚ÄúBasketball is a tough game mentally anyway. But dealing with COVID, games getting canceled and postponed, all of that stuff. It was mentally exhausting.

‚ÄúWith my body and my knees, there were definitely moments I struggled. But my teammates picked me up through everything, just like I tried to help any of them when they needed it.‚Äù

The oldest Huskies player - she turns 23 in September - says she‚Äôs become a learner as much as a leader in her time at UConn.

She has a lot to look forward to as the Huskies return their starting lineup and welcome Ohio State transfer Dorka Juhasz along with a highly touted recruiting class. UConn will also travel to Oregon this season to face the Ducks. Eugene is about an hour away from Westbrook‚Äôs home.

For her, there‚Äôs unfinished business as she said in an April 4 social media post making her return to UConn public.

‚ÄúCoach told us that he could see a difference in the returners coming back and just our young guys coming in being super-competitive,‚Äù Westbrook said. ‚ÄúThey‚Äôre wanting to get better, wanting to learn. We‚Äôve been really getting after it.

‚ÄúI think we got better the month we were here and we need to continue to get better. ‚ÄúWe‚Äôve got to go home and not let this all go to waste. It‚Äôs been a great experience the last month, but we need to keep working.‚Äù