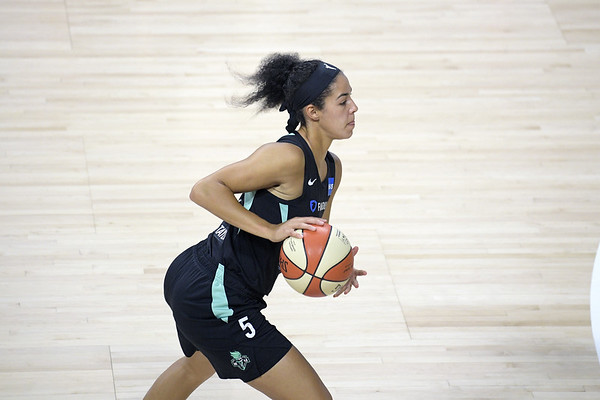 New York Liberty guard Kia Nurse (5) sets up a play during the first half of a WNBA basketball game against the Seattle Storm, Tuesday, Aug. 18, 2020, in Bradenton, Fla. (AP Photo/Phelan M. Ebenhack) Buy this photo
Published on Wednesday, 30 June 2021 16:00
Written by CARL ADAMEC

The 2018 graduate and current member of the WNBA’s Phoenix Mercury will have some Huskies’ company on her team in Tokyo next month.

UConn sophomore Aaliyah Edwards was selected for Team Canada Tuesday and she’ll join Nurse on the 12-player roster. The 5x5 women’s basketball competition is scheduled to begin July 25 and finish with the gold-medal game Aug. 7.

“We’ve selected a team that is dynamic, relentless and together,” Team Canada coach Lisa Thomaidis said in a statement. “We have an exciting mix of youth and experience - a trio of three-time Olympians, along with six Olympic rookies. Half the team has represented Canada at previous Olympics, and we’ll be leaning on our collective experience to navigate our Tokyo journey.”

Edwards, a native of Kingston, Ontario, was the 2021 Big East Sixth Woman of the Year and a unanimous pick to the conference’s all-freshman team. The 6-foot-3 forward averaged 10.7 points and 5.7 rebounds per game. She represented Canada at the AmeriCup earlier this month and is the youngest player on Canada’s roster.

Canada qualified for Tokyo after going unbeaten at a FIBA qualifying tournament in Ostend, Belgium in February 2020.

In preliminary-round Group A play, Canada will face Serbia, South Korea, and Spain.

“There has been no greater honor for me than representing my country on the world stage this past decade,” said Achonwa, the former Notre Dame standout. “We’re focused on bringing a medal back to Canada and they say ‘third time’s the charm’ so hopefully, this is the summer our dreams come to fruition.”

In preliminary-round Group B play, Team USA will face Nigeria on July 27, host Japan on July 30, and France on Aug. 2.

The Americans have won the gold medal in six consecutive Olympic Games with UConn having at least one representative on each of those teams.