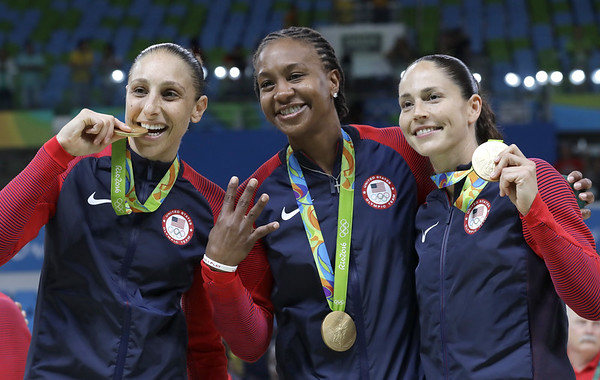 FILE - In this Aug. 20, 2016, file photo, United States' Diana Taurasi, left, Tamika Catchings, center, and Sue Bird, right, celebrate with their gold medals after their win in a women's basketball game against Spain at the 2016 Summer Olympics in Rio de Janeiro, Brazil. Taurasi and Bird, who won their fourth straight Olympic gold medals in Rio, are leaving the door open to continuing their U.S. careers. (AP Photo/Eric Gay, File) Buy this photo
Published on Tuesday, 22 June 2021 19:37
Written by

The UConn womenâ€™s basketball team will be well represented at the Tokyo Olympics next month.

Bird and Taurasi will each be making their fifth Olympic appearances. The duo has captured the gold medal in each of their first four appearances.

Joining them are Tina Charles, Breanna Stewart and Napheesa Collier. Charles is making her third Olympic appearance, Stewart is making her second and Collier is debuting with the team.

Team USA will play in Group B in the round-robin portion of the tournament along with Nigeria, Japan and France. The competition runs from July 26-Aug. 8 in Saitama, Japan, with the U.S opening play July 27 against Nigeria.

Bird and Taurasi will be competing in their fifth Olympics, tying a record shared by six other men and womenâ€™s basketball players.

The USA, which owns an all-time record of 66-3 in Olympic play, enters the Tokyo Olympics riding a 49-game winning streak in Olympic competition, which began with the 1992 bronze medal game and includes a record six-straight gold medals.