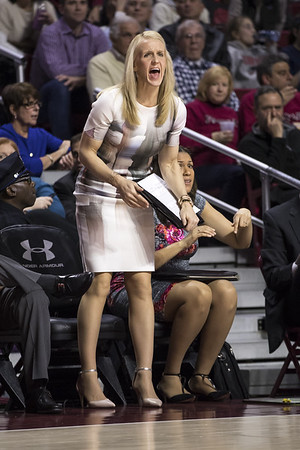 Shea Ralph will always be a part of the University of Connecticut women's basketball family and has a permanent home at Gampel Pavilion in the Huskies of Honor program.

But the former UConn All-American who has spent the last 13 seasons as an assistant on coach Geno Auriemma's staff, is moving on. The Fayetteville, North Carolina, native has accepted the head coaching job at Vanderbilt University in Nashville, Tennessee.

She replaces Stephanie White, who was fired last week.

“It is with great honor and a full heart that I join Vanderbilt University as the next women’s basketball head coach,” Ralph said in a statement . “I have always been motivated and inspired by people who have a passionate pursuit of excellence. Vanderbilt’s rich, storied tradition of excellence speaks for itself, but I believe what sets us apart is the people. I am so excited to work alongside our amazing community in elevating our women’s basketball program back to an elite level. Together we will invest in each other and build a greatness that transcends the game of basketball.”

During Ralph's tenure on the bench alongside Auriemma and associate head coach Chris Dailey, the Huskies compiled a 462-22 (.955) record with six national championships, 12 NCAA Final Four appearances, 12 league tournament titles, and 11 league regular season crowns. She was part of the two longest winning streaks in NCAA history -- 111 games (2014-17) and 90 (2008-10).

"I would like to congratulate Shea on being named the head coach at Vanderbilt University," Auriemma said in a statement. "I know everyone here at UConn is incredibly excited for Shea. It's an amazing opportunity to be at such a great university in a great city. Shea has had a huge impact on the UConn women's basketball program, as both a player and a coach. We're going to miss her tremendously – she brought passion and energy to everything she did in Storrs. But we know she's going to do amazing things at Vanderbilt and we wish her the best."

Ralph, a 6-foot guard, came to UConn as a player in 1996 after a star-studded career at Terry Sanford High where she was a WBCA All-American as a senior and the second UConn recruit behind Nykesha Sales to be named USA Today's high school Player of the Year.

She was the Big East and USBWA Freshman of the Year in 1997. The Huskies entered NCAA tournament play unbeaten at 30-0 and were the overall No. 1 seed. But moments after coming off the bench for the first time against Lehigh in the opening round at Gampel Pavilion, Ralph tore the anterior cruciate ligament in her right knee trying to catch a lead pass on the baseline. She would have surgery and UConn would lose in the regional final to eventual champion Tennessee, a team the Huskies had beaten in the regular season.

Her rehabilitation was on schedule but in August of 1997 she tore the ACL for a second time and had surgery. She would redshirt during the 1997-98 season. She'd return the following season and average 16.7 points and set the stage for her All-American campaign.

In 1999-2000, she averaged 14.9 points on 62.4 percent shooting from the floor, 3.7 rebounds, 4.9 assists, and 2.6 steals in 37 games and was the Big East Player of the Year and a consensus first-team All-American. She capped off UConn's 36-1 season and run to the national championship by being named the Most Outstanding Player of the Final Four in Philadelphia after producing 15 points (7 for 8 from the floor) and seven assists in a 71-52 rout of Tennessee in the final.

Ralph struggled her redshirt senior season put when the postseason arrived, "Tournament Shea" was back and she led the Huskies into the Big East final against top-seeded Notre Dame, looking to avenge a regular season loss. Alongside future national Player of the Year winners Ruth Riley of Notre Dame and UConn's Sue Bird and Diana Taurasi, Ralph was the best player on the court in the opening 15 minutes with 11 points and six assists. But with the Huskies leading by five with 5:18 left in the first half, Ralph's left knee gave way on a fast break and she fell to the floor. UConn won the title on Bird's buzzer-beating foul-line jumper, but Ralph's college career was over as she had the ACL in her left knee.

She finished with 1,678 points on 57.9 percent shooting, 510 rebounds, 456 assists and 252 steals. She was selected in the 2001 WNBA Draft in the third round by the Utah Starzz, but was unable to compete due to the knee injuries.

Ralph received her degree in exercise physiology in 2001 and spent a season as an assistant coach with the Springfield Spirit of the National Women's Basketball League before joining coach Agnus Berenato's staff at Pittsburgh. During her five seasons with the Panthers, they had three 20-win seasons and in 2008 reached the NCAA Sweet 16 for the first time with a second-round win over Baylor.

She returned to Storrs that summer when Tonya Cardoza became the head coach at Temple. Ralph worked primarily with the guards in her role at UConn.

“Coach Ralph has earned the opportunity to take the reins of our women’s basketball program and transform it into what we all know is possible,” said Vanderbilt athletic director Candice Lee in a statement. “She knows what winning looks like, and she has the background and experience-as both a player and a coach-to develop our student-athletes into champions.”

White was 46-83 in five seasons with the Commodores including went 13-54 in the Southeastern Conference. Vanderbilt opted out this season on Jan. 18 after going 4-4 overall and 0-3 in the SEC. It has not been to the NCAA Tournament since 2014.