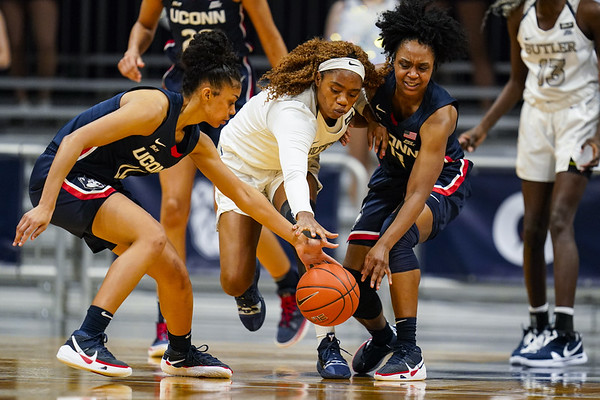 Texas A&M moved up to No. 2, its highest ranking ever in The Associated Press women's college basketball poll, a day after winning its first Southeastern Conference regular-season title.

The Aggies (22-1) beat then-No. 5 South Carolina on Sunday to win the conference title and then moved up a spot in the Top 25.

“We needed to win this game to solidify who were were and what we’ve earned,” said Texas A&M coach Gary Blair, whose team received two first-place votes on Monday from a 30-member national media panel.

UConn remained the top choice in the poll, getting 27 first-place votes. The Huskies finish off their regular season on Monday night against Marquette.

North Carolina State fell to No. 3, with Stanford and Louisville rounding out the first five teams in the poll.

Baylor, South Carolina, Maryland, UCLA and Indiana were the next five.

Texas A&M has reeled off 10 consecutive wins since its overtime loss at LSU. The Aggies snapped a seven-game losing streak to South Carolina on Sunday.

“We’re the two best teams in the SEC and we had to prove it night in and night out,” Blair said. “Now it’s up to both of us to throw this season away and start all over at the SEC Tournament and the NCAA Tournament.”

The Aggies were one of the few teams not to have games scrapped this season because of coronavirus issues.

Here are a few other tidbits from the poll:

No. 10 Indiana reached the top 10 of the poll for the first time in school history. The Hoosiers needed to rally from a nine-point fourth-quarter deficit at Ohio State last week. It was the team's first win in Columbus since 2002 and first overall win over the Buckeyes since 2010. The Hoosiers (16-4, 14-2 Big Ten) have the most conference wins under coach Teri Moren.

Led by Texas A&M, the SEC has five of the first 16 teams in the poll, with No. 13 Arkansas, No. 14 Tennessee and No. 16 Georgia joining the Aggies and Gamecocks. The conference had a strong presence in the latest NCAA Top 16 reveal, with six of the top 16 seeds, including Texas A&M and South Carolina projected as No. 1s. Those rankings came out before Sunday's games.

GAME OF THE WEEK

Maryland at Michigan, Thursday. The Terrapins can wrap up a third consecutive Big Ten title with a victory over Michigan or a loss by Indiana to Iowa on Wednesday. The Wolverines are trying to get a signature win heading into the conference tournament.