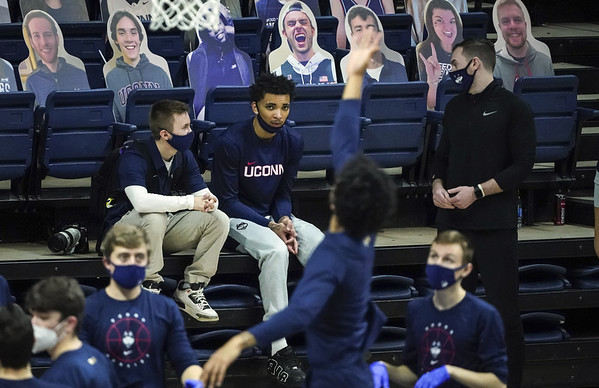 UConn guard James Bouknight, rear center, watches from the sideline as his teammates warm up before a game earlier this season | AP Buy this photo
Published on Monday, 8 February 2021 20:18
Written by NEILL OSTROUT

STORRS - Some 10 minutes before his teamâ€™s game with Seton Hall was about to tip off, with his teammates heading back to the locker room one final time, UConn guard James Bouknight planted himself in the corner beside the visitorâ€™s bench on the Gampel Pavilion court.

Wearing sweatpants, unlike his uniformed teammates, and sporting a mask, Bouknight beckoned a team manager gathering the loose balls for a pass and prepared to shoot a 3-pointer.

UConn forward Akok Akok, who like Bouknight was sitting out Saturdayâ€™s game with an injury and who likewise wasnâ€™t entirely thrilled with that notion, quietly watched the whole scene play out.

As Bouknight prepared to launch his practice shot the 6-foot-9 Akok suddenly raced out from behind his fellow sidelined teammate, and playfully swatted the shot away.

Bouknight, slightly amused and also slightly annoyed, then picked up another ball and hoisted the jumper he had planned once again. This time the shot went through the net, and Akok and Bouknight quickly dashed off to join their teammates and coaches for a few final words of encouragement before the Huskies took on the Pirates.

It was clear both men, despite their respective ailments, were itching to get on the action.

As far as Bouknight goes, coach Dan Hurley confirmed as much later in the day.

â€śHe pushed hard to play today. He put a lot of pressure on the medical staff (Friday) night,â€ť Hurley said after the game, which UConn lost 80-73 to fall to 8-4 overall, including 3-3 since Bouknight was sidelined with an elbow injury.

The Huskies had a chance to win Saturday despite Bouknightâ€™s continued absence. The stormed back from a stunning, early 18-point deficit to pull within two points just after halftime.

However, the Huskiesâ€™ impressive offensive output over the gameâ€™s final 25 minutes could not overcome some lackluster defense down the stretch and UConn suffered its first home loss to Seton Hall since 1997.

Had Bouknight been playing - or perhaps even had there been more than a handful of fans in the stands at Gampel Pavilion - UConn almost certainly would have won.

The good news for UConn fans is they may not have to wait long to see Bouknight playing again, at least on television.

Bouknight, who had elbow surgery Jan. 12 in New York, is very likely to play when the Huskies return to action Wednesday in Providence. Hurley on Saturday called it a â€śgame-time decision.â€ť

â€śHe hits his four-week range on Monday (today),â€ť Hurley said. â€śI canâ€™t tell you the extent of what he did in practice but he pushed.â€ť

The Big Eastâ€™s leading scorer when he was injured, Bouknight has no longer played a high enough percentage of his teamâ€™s games to officially qualify for the statistical lead, but his 20 points-per-game would be a welcome addition for UConn nonetheless.

â€śWhen one of the best players in the country returns, weâ€™ve got potential,â€ť is how Hurley put it.

As evidenced by his coachâ€™s description of the practices leading up to the Seton Hall game, not to mention Bouknightâ€™s pre-game antics on Saturday, the sophomore from Brooklyn isnâ€™t going to rest on his college basketball laurels and head to the professional ranks just yet.

â€śHe wants in. Heâ€™s not trying to sit and keep his status of where he stands for his potential future earnings. This dude wants back in. Thatâ€™s great to see in the culture we have in basketball today. Itâ€™s not always like that,â€ť Hurley said.

To be fair, UConn maybe didnâ€™t need Bouknight on Saturday. It wasnâ€™t the teamâ€™s offense that was a problem.

But that game was something of an anomaly. UConn has been outstanding on defense without Bouknight and entered the weekend leading the league in scoring defense (63.0). Against Seton Hall, UConnâ€™s defense floundered.

â€śWe would go on runs, runs, runs, but we couldnâ€™t get a stop. Thatâ€™s what affected us the whole game,â€ť sophomore point guard Jalen Gaffney said.

Certainly Akok, with his shot-blocking ability, could have been more of a factor against Seton Hall. Alas, even when on the court this season the sophomore forward hasnâ€™t been quite himself. His surgically repaired Achilles tendon is fine, but a somewhat unrelated nagging leg injury has kept him out of action.

No, it is Bouknightâ€™s who is the proverbial prodigal son in this scenario.

And by all accounts, heâ€™s more than ready for a return.