UConn women's basketball moves up to No. 2 in latest AP Top 25 poll 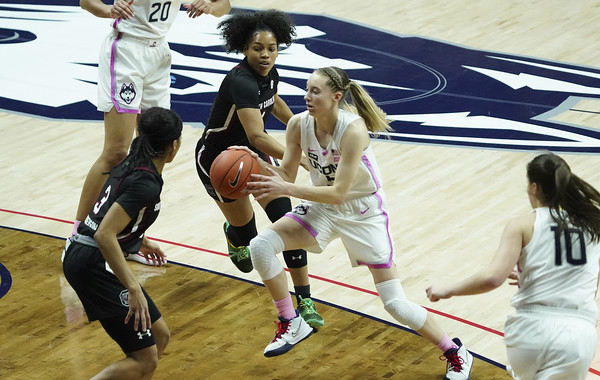 UConn guard Paige Bueckers (5) moves the ball against South Carolina in the first half of an NCAA college basketball game on Monday | AP Buy this photo
Published on Monday, 8 February 2021 20:15
Written by DOUG FEINBERG

Coach Dawn Staley has South Carolina back where her team started the season: at No. 1 in The Associated Press women's college basketball poll.

The Gamecocks regained the top spot on Monday, receiving 29 of 30 first-place votes from a national media panel.

The Gamecocks will be tested right away; they visit No. 2 UConn on Monday night in the 60th matchup ever between the top two teams in the poll.

South Carolina, which originally fell from the top spot after losing to North Carolina State, looks to make it two straight wins over UConn after beating the Huskies for the first time in eight tries last season, 70-52.

“It is less pressure but more hunger,” Staley said Saturday. “To beat somebody at home is a little easier than beating them on the road. And I just hope we’re able to check that off the list and continue what UConn used to do to us: Link those wins together and don’t look back.”

These same two teams met five years ago to the day in another 1-2 contest. The positions were reversed and the Huskies stayed No. 1 with a 12-point win.

UConn moved up one spot to No. 2 on Monday after then-No. 1 Louisville lost at home to No. 4 North Carolina State last week. The Cardinals fell to third and the Wolfpack remained fourth. They lost to unranked North Carolina on Sunday.

No 5. Stanford, Texas A&M and Baylor each moved up a spot, while UCLA, Maryland and Arizona rounded out the top 10. Arizona visits No. 11 Oregon on Monday night.

Mississippi State dropped out of the poll for the first time since 2014, ending a streak of 125 consecutive weeks in the Top 25. That was the fifth-longest active streak. The Bulldogs, who had been in every poll since Nov. 24, 2014, didn't play last week, when their game against Tennessee was postponed because of COVID-19 issues within the Lady Vols’ program. The Bulldogs haven't played since Jan. 28 and have dropped their last three contests.

Missouri State entered the rankings at No. 25.

Here are other tidbits from the poll:

Monday marked the 800th women's college basketball poll in the AP's history. No team has been in it more than Tennessee, with 745 appearances. The late Pat Summitt had 618 of those when she was in charge of the Lady Vols. The team was unranked only 14 weeks while she was coaching. UConn is second on the list with 554, all under Geno Auriemma.

According to poll historian Mel Greenberg, who started the poll in 1976, Kim Mulkey is the active leader with 663 poll appearances from her time as a player at Louisiana Tech, an assistant coach there and head coach of Baylor. Mulkey trails only former Tennessee player and coach Holly Warlick for most all-time appearances. Warlick had 693 appearances in the poll.

GAME OF THE WEEK

Oregon at UCLA, Friday: a huge Pac-12 matchup with the Ducks visiting the Bruins. UCLA suffered a tough loss at Washington State on Friday night.