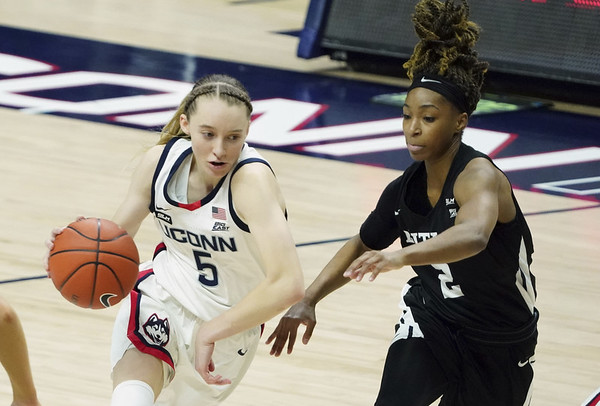 The UConn women's basketball team is still waiting to see if freshman guard Paige Bueckers will play in Thursday's game at No. 19 Arkansas, but the Huskies' wait for their newest player is over.

Saylor Poffenbarger, who graduated from high school early and enrolled in classes for the spring semester earlier this month, worked out for the first time with her teammates Tuesday. The 6-foot-2 guard from Middletown, Maryland, had been in a 10-day quarantine since arriving at school due to COVID-19 protocols. She has done individual workouts with UConn assistant coach Shea Ralph.

“Saylor was cleared to practice and practiced a little bit (today) for the little bit that we did,” UConn coach Geno Auriemma said on a Zoom call Tuesday. “She picks things up pretty quickly. I don’t know that she's game-ready. I don’t think she'll be game-ready in two days. I don’t know. At some point I'll go in the gym and I'll say, ‘I think we should put her in.’ I don’t know when that time is.”

Poffenbarger averaged 21.5 points, 12.7 rebounds, 5.5 assists, 2.2 steals, and 2.8 blocked shots as a junior in leading Middletown High to a 25-1 record and the Maryland 2A state tournament semifinals before play was halted due to the pandemic. She was also a member of USA Basketball's 2019 U-16 national team.

Bueckers, who is averaging 17.1 points and leads the Big East in assists (5.7) and steals (2.9), injured her right ankle late in third-ranked UConn's win at Tennessee last Thursday. She did not play against Georgetown on Saturday.

“Paige feels better,” Auriemma said. “She didn’t practice (Tuesday) but she went a little bit Monday with some light shooting drills. She does have a better chance of playing on Thursday than of not playing.”

Sophomore guard Anna Makurat is out indefinitely with a lower right leg injury.

Tuesday was the first anniversary of the helicopter crash in California that claimed the lives of NBA legend Kobe Bryant, his 13-year-old daughter Gianna, and seven others.

Gianna dreamt of playing for the Huskies - her father once saying she was “hellbent” on doing so -- and attended with her father their November 2017 game at UCLA, their 2018 Final Four semifinal game against Notre Dame, and their 2019 Senior Day game versus Houston. On Tuesday, the UConn women's basketball Twitter account posted a picture of a letter Gianna sent the team following its loss to Mississippi State in the 2017 Final Four semifinals that included, “When you think you can't UCONN.”

UConn honored the Bryants in a pregame ceremony before facing the USA national team in an exhibition at the XL Center the day after the crash including laying a No. 2 jersey - Gianna's uniform number with her AAU team - and flowers on a chair next to the starters when they were introduced. Auriemma spoke at the memorial service in Los Angeles as did ex-UConn great Diana Taurasi on Feb. 24.

“I’m amazed that it's been a year already,” Auriemma said. “I’m amazed so much has transpired since last January. It doesn’t seem like that long ago, does it? But then given all that has happened, it seems like forever ago. I was actually in my restaurant recently and on the TV they were showing some highlights. I just kind of stood there and watched it for a few minutes. It's almost like you needed a reminder, because you have been hit with so many things this past year. It was good to get reminded. It was really good.

“Being reminded brings a lot of melancholy to the situation,” he added. “It's still hard to grip. I can’t get a grip on it. It's hard to fathom. All the noise that has happened this year, all the incredible Hall of Famers that have died this year. Death has been a big part of this year. But his death? That is a hard one to reconcile.”

UConn's Olivia Nelson-Ododa was among 15 players named to the 2021 Naismith Women’s Defensive Player of the Year watch list on Tuesday. The junior center leads the Big East in blocked shots (2.0) while averaging 15.8 points on a league-leading 64.0 percent shooting from the floor and 7.7 rebounds.

She was also on the midseason watch list a year ago when she finished with 100 blocked shots, joining Kiah Stokes, Rebecca Lobo, Breanna Stewart, and Kara Wolters as the only Huskies to reach that milestone.

Others on the 2021 watch list include 2020 Defensive Player of the Year DiDi Richards of Baylor, and 2020 finalists Aliyah Boston of South Carolina and Aari McDonald of Arizona.