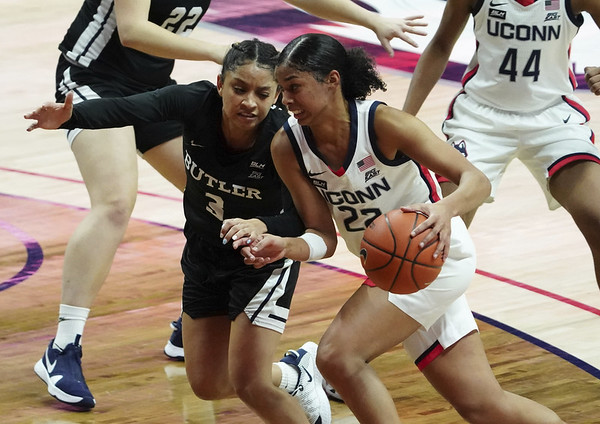 Evina Westbrook headed to the visitor‚Äôs locker room at Thompson-Boling Arena Thursday night after the UConn women‚Äôs basketball team‚Äôs 67-61 win over Tennessee with one thought in mind.

‚ÄúOne of the first words that came out of my mouth was, ‚ÄòI‚Äôm glad it‚Äôs over,‚Äô ‚Äù Westbrook said.

Westbrook, who played her first two seasons for the Lady Vols, left another impression before leaving Knoxville for maybe the last time.

The redshirt junior guard finished with 15 points, five rebounds, and four assists. Her back-to-back 3-pointers in the fourth quarter started a 9-0 run that gave the third-ranked Huskies a lead they would not relinquish.

‚ÄúI thought she was unbelievably good,‚Äù UConn coach Geno Auriemma said. ‚ÄúShe made some clutch, clutch shots in big moments in the game. It couldn‚Äôt have been easy for her to come here but I couldn‚Äôt have asked her to play any better.‚Äù

At shootaround, he pulled her aside.

‚ÄúCoach said to play with emotion but not let it get the best of me,‚Äù Westbrook said. ‚Äú I didn‚Äôt try to do too much and let the game come to me, play with my teammates and try to get them open. I didn‚Äôt want to get out of character.

‚ÄúI leaned on my teammates for a lot of it because I knew they were going to have my back in any situation.‚Äù

Westbrook broke the game‚Äôs last tie with her trey with 6:44 to go and added a second 66 seconds later. After Tennessee cut a nine-point deficit to two in the final minute, Westbrook whipped a pass to Paige Bueckers with the shot clock winding down and the freshman‚Äôs trey was a dagger.

With 14.1 seconds left, Westbrook hit a free throw to account for the final score.

‚ÄúI didn‚Äôt come in here wanting to prove people wrong,‚Äù Westbrook said. ‚ÄúI wanted to prove to people who believed in me from the start right.

‚ÄúThose two threes were big for us and gave us a lot of momentum, gave us a lot of energy. That‚Äôs what my team needed. That‚Äôs any game, not because we were playing Tennessee. Whatever the team needs me to do, whether it‚Äôs assists or box outs or screens, I‚Äôm going to try and do that.‚Äù

She did just that.

One thing Auriemma had in common with late Tennessee coach Pat Summitt was they‚Äôd play any opponent anywhere at anytime.

Thursday night‚Äôs game concludes the two-game contract between UConn and Tennessee. On Monday, Auriemma said, ‚ÄúI think people have to realize that it‚Äôs not a big deal anymore.‚Äù Then after hearing Tuesday that Summitt‚Äôs former point guard, Lady Vols‚Äô coach Kellie Harper, was hopeful they could continue to play, Auriemma said he could see it happen.

‚ÄúPlaying them is a good game,‚Äù Auriemma said after his team‚Äôs win. ‚ÄúIt‚Äôs been awhile since the game was easy to put together. Up to now it wasn‚Äôt. Now that it feels like everyone is OK with doing it, especially when the fans come back, you want to give your players the chance to play the best teams in the toughest environments.‚Äù

A crowd of 3,553 was allowed in for the first meeting between UConn and Tennessee in Knoxville in 15 years.

"My first thought was that I hate we weren‚Äôt going to have 22,000 people here today. That would have been really cool for both teams,‚Äù Harper said.

UConn leads the series with Tennessee 15-9 and is 5-3 against the Lady Vols at Thompson-Boling Arena.

UConn will take on Arkansas at Bud Walton Arena in Fayetteville next Thursday.

‚ÄúI‚Äôm really excited for that,‚Äù Williams said. ‚ÄúIt‚Äôs my homecoming game and usually they do it for your senior year but mine is coming early. I haven‚Äôt played there since my last high school state championship game. So I‚Äôm excited and I‚Äôm glad my family will be able to see me.‚Äù

Fayetteville is a three-hour drive from Little Rock. UConn was to start a home-and-home series with Arkansas-Little Rock this season with Williams getting a homecoming game in 2021-22 before the pandemic hit. The fate of that series is unknown.

Next Thursday‚Äôs date came open for the Razorbacks when Vanderbilt opted out of the season Monday. Auriemma got on the phone with Arkansas coach Mike Neighbors and the schools put the game together.

‚ÄúWe‚Äôre going to get on a plane and go to Arkansas and they‚Äôre going to try and score 120 on us because that‚Äôs the way they play,‚Äù Auriemma said. ‚ÄúWe‚Äôve got three SEC teams. Who knows who we might end up playing if this thing keeps going sideways?

‚ÄúI called Neighbors and said, ‚ÄòMike, do you want to play?‚Äô He said, ‚ÄòYeah, we‚Äôd love to play.‚Äô At this point it doesn‚Äôt matter who you play, when you play, where you play. You need to play games and play people who are pretty good if you can.‚Äù

Auriemma and Harper each made $10,000 personal donations that will benefit the Pat Summitt Foundation and the Women‚Äôs Basketball Hall of Fame ‚Ä¶ Bueckers and Tennessee‚Äôs Jordan Horston were teammates on USA Basketball‚Äôs 2018 national team that won the gold medal at the FIBA U-17 World Cup. The duo made just 3-of-25 shots in their first game as opponents ‚Ä¶ Aubrey Griffin made her second straight start for UConn and had 10 points, four rebounds, and two blocked shots in 23 minutes. ‚Ä¶ While Tennessee players wore ‚ÄúSummitt‚Äù on the back of their uniforms to honor the late Hall of Fame coach, UConn‚Äôs uniforms had ‚ÄúDee‚Äù above the star on the back to honor long-time coach and administrator Dee Rowe, who died on Jan. 10.