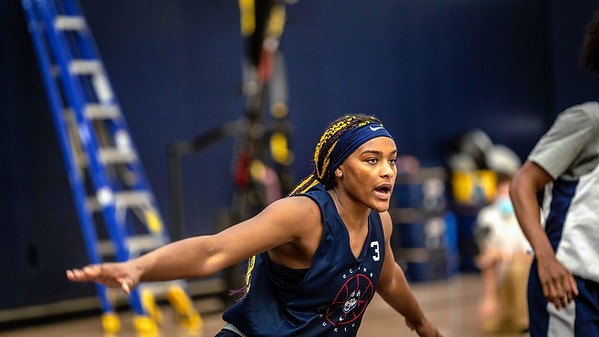 When Aaliyah Edwards was looking for advice on how to make an immediate impact with the UConn women's basketball team upon her arrival in Storrs, she could not have found a better source than Kia Nurse.

Nurse, Edwards' teammate with Canadian national team, broke into the starting lineup in the third game of her freshman year with the Huskies. Nurse started all but one game (Senior Day 2015) the rest of her college career.

“I definitely did reach out and chat with Kia Nurse as she was a vet here and is playing professionally in the WNBA,” Edwards said on a Zoom call last week. “I got some good pointers and different lessons in how I can make my way around the UConn family. She has been a key mentor for me transitioning from high school to college as well as being an adult here and being a professional here.

“Everyone knows Kia Nurse is a competitor, and I think that is really the main message she was trying to tell me. Whether it is practice, in the game or in the books, you just want to do the best at everything you can and make sure that you are doing the little things, as well. Don’t think you are going to be perfect at the start. As you keep working at it and grinding at it, you can be successful.”

Edwards - a 6-foot-3 forward from Kingston, Ontario, Canada - seems to have made a good impression since the Huskies arrived on campus in late July and leading up to last week’s official start of practice.

When there are comparisons in the early going to two-time All-American Napheesa Collier - named the 2019 WNBA Rookie of the Year and to the 2020 all-WNBA second team while finishing fifth in the Most Valuable Player voting - people are noticing what you’re doing.

“I don’t know whether or not she has Pheesa’s game, but when you think back to when Pheesa was a freshman she played behind (Breanna Stewart, Morgan Tuck and Gabby Williams) so there wasn’t a lot of room. I think Aaliyah is in a different situation. She is going to have to play a lot. She is going to be thrown into situations that are going to make her grow up fast. Pheesa had an opportunity to kind of slide in there.

“In terms of their makeup, their motor, and how hard they go, she has a lot of Pheesa’s qualities now. If she can develop her game to match Pheesa’s game then we are on to something.”

Edwards graduated from Crestwood Prep in Toronto last spring after leading the Lions to the Ontario Scholastic Basketball Association championship. In the final game against Niagara Prep, she had 32 points and 18 rebounds in a 93-70 win.

She has also made a name for herself with Team Canada. She averaged 9.3 points and 6.3 rebounds in the 2018 FIBA U-17 World Cup, and topped the Canadians in scoring (11.4) and rebounding (6.7) at the 2019 FIBA U-19 World Cup. She had eight points in a loss to future UConn teammate Paige Bueckers and the United States, the eventual gold medalist, in the quarterfinals.

“Aaliyah is a great passer, great rebounder, great defender, great finisher,” Bueckers said. “She is everything you always ask for in a post, but she isn’t just a post. She can also go outside and make plays. She can shoot the ball from the outside. So I’m really excited about playing with her.”

Later in 2019, Edwards was the youngest player on Canada’s senior national team at the FIBA AmeriCup in Puerto Rico. In the final against Team USA that included Collier, fellow former UConn All-Americans Tina Charles, Stefanie Dolson, and Katie Lou Samuelson, and future teammate Olivia Nelson-Ododa, Edwards had nine points, three rebounds, and four steals in 18 minutes of a 67-46 loss. She then played in a three-game FIBA Olympic pre-qualifying tournament in Edmonton, another step on the way to Team Canada earning a spot in the Tokyo Games.

Her experiences have helped in her adjustment to college life.

“In terms of being away from home, it’s been good so far,” Edwards said. “It’s unfortunate that we won’t be able to go home as often as we would usually so I am missing the family, but we do connect virtually so it's good. Being with the national team also helped me prepare for kind of these tough schedules going back-to-back and how demanding it is on and off the court.

“The past couple months have gone very well as I have been transitioning very smoothly to college itself and the level of competitiveness college basketball offers. I’m also adjusting well with the team. I love the team. With officially practice starting, that is exciting because the season is not far away. I feel like we have been more locked in since the announcement of the start of the season.”

UConn will open the regular season Nov. 28 against Quinnipiac in the opening round of the Hall of Fame Challenge at Mohegan Sun Arena, with a game the next day against either Mississippi State or Maine back at the casino.

Edwards said she tries to model her game after Los Angeles Sparks star Candace Parker (Edwards wears the same No. 3 as Parker) and added that late Lakers great Kobe Bryant is an inspiration to her saying his mindset is what she loves and aspires to have.

Her size is a welcome addition to the Huskies’ frontline.

“For me, my strength is just being a competitor,” Edwards said. “I have that competitive mindset that I feel cannot only help me as an individual player but also me as a team player, just being relentless and doing the little things, rebounding, going after those loose balls.

“I definitely want to bring just being a big presence in terms of being that slasher or that high post player. I feel like it would be possible for me to utilize my speed and versatility in that aspect of slashing and rebounding. I also feel like defensively I can use my length.”

Another adjustment to college life is with academics, though Edwards noted that most of her classes this semester are online. With five other freshmen on the Huskies' roster, she has plenty of support from those going through the same thing.

With her size, talent, and ability, UConn hopes the learning curve on the court is smooth.