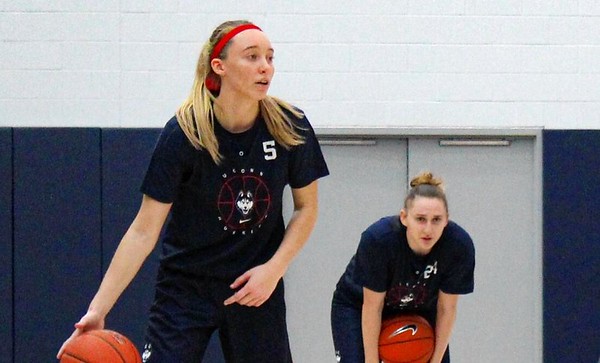 An article by fivethirtyeight.com in May estimated her potential earnings at $670,783 - No. 1 on a list that included Clemson quarterback Trevor Lawrence and 2020 men’s basketball Player of the Year Obi Toppin of Dayton - if the NCAA allowed its athletes to profit off their name, image and likeness.

But the consensus 2020 national high school Player of the Year considers herself just another freshman hoping to make an impact. The 5-foot-11 guard took part in her first official practice with the UConn women’s basketball team on Wednesday.

“She hasn’t been walking around and acting like she is any different than anybody else,” UConn coach Geno Auriemma said on a Zoom call following his team’s workout. “She’s like, ‘I’m just a freshman coming into a big-time program trying to find my way.’ Don’t get me wrong, she knows she’s good and that’s part of being good. She knows there are things she can do that are kind of unique, and she has fun with it.

“I have fun with her. I enjoy being around her. She doesn’t take herself too seriously. I can’t even tell you all the names that I call her, because I just get such a kick out of it.”

Bueckers let the cat out of the bag about one of those names.

“He calls me Paige Kardashian all the time,” Bueckers said. “I tell him all the time that I agree with him because I don’t understand why I’m famous either. I’m just working to prove myself.”

Bueckers, who turns 19 next Tuesday, earned her notoriety on the court with her success playing for Hopkins High in Minnesota and for USA Basketball. The Royals won the final 62 games Bueckers played in, including the 2019 Class 4A state crown, and were a win away from a successful title defense before the championship game was canceled due to the COVID-19 pandemic. She was also USA Basketball’s 2019 Female Athlete of the Year, joining former UConn star Breanna Stewart as the only players with high school eligibility to be so honored. She has won four gold medals representing her country.

She has also made her opinions known on social issues like the Black Lives Matter movement.

But on Wednesday, it was about basketball and fun.

“Paige is my idol,” Auriemma said with a smile. “Paige is famous for being famous. I say to her all the time, ‘Paige, you’re like the most famous basketball player in the country.’ Some people say you’ve got four national championships or you’ve got three Final Fours. Or you’ve got four Olympic gold medals. What are you famous for?

Bueckers is one of six freshmen on the 11-player roster. The recruiting class is ranked No. 2 in the country. She is the most-hyped recruit to come to Storrs since Stewart appeared eight years ago.

And like Stewart, Bueckers wants to win four national championships. The first official day towards that was Wednesday.

“It’s just instinct to be more excited when official practice starts because that means the season is starting soon and we’re going to have plenty of games,” Bueckers said. “Especially under these circumstances it gets everybody happy. It was a lot of hard work, a lot of running, a lot of up and down. We worked on everything basically, and it was very intense. There is a sense of urgency, because we know the season is starting. It was hard, as to be expected.

It won’t get easier as the games get closer. The Huskies are expected to open the season Nov. 28-29 at the Hall of Fame Challenge at Mohegan Sun Arena.

Right now for UConn and Bueckers, it’s about improving every day.

“I want to show that I can play basketball, and I can come together with the team,” Bueckers said. “That’s all I’m really focused on. I won at the high school level, and I just want to continue that winning streak onto the college level.”