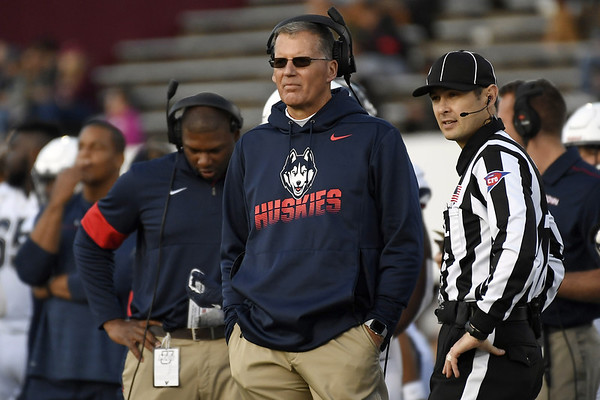 Connecticut head coach Randy Edsall during the first half of an NCAA college football game in Amherst, Mass. | AP Buy this photo
Published on Tuesday, 22 September 2020 12:31
Written by NEILL OSTROUT

The UConn football program was the first FBS program in the nation to cancel its season due to coronavirus concerns, pulling the plug on 2020 back on Aug 5. Many teams and conference followed suit soon after.

Lately, there has been a litany of schools rethinking that decision and scrambling to get back in the game.

UMass, the Huskies’ closest major college football neighbor and its fellow independent, is the latest to run a reverse. The Minutemen announced Monday that they would indeed play some games this fall, hoping to begin doing so in less than a month and expecting to play as many as six.

But UConn, despite conferences like the Big Ten already slated to return and leagues like the Pac-12 and Mountain West nearing decisions to do the same, does not appear ready to follow the national - and, thanks to UMass, even local - trend.

UMass Athletic Director Ryan Bamford said after Monday’s announcement that he’d like his team to face the Huskies this season but doesn’t believe it will happen.

“Our latest status report was they weren’t going to return in the fall. That was late last week,” Bamford said during a Zoom call with reporters. “If that’s changed at all, we’d certainly welcome it. They’re close by. They’re in a state that’s managed this COVID environment really well over the last three or four months, like Massachusetts has. And certainly they’ve become sort of a natural rival.

“We’d love to have the opportunity to play them but I’m not sure that their thinking has changed since they made their decision back in August.”

UConn coach Randy Edsall confirmed Tuesday the Huskies will not be fielding a team for competition this fall.

“We’re not changing,” Edsall said. “We’re not going to change.”

The Huskies continue to go through team workouts, something akin to light practices on Tuesdays and Thursdays, while having team weightlifting sessions on Mondays, Wednesdays and Fridays.

They are not going to change course and resume competition soon, though the Huskies are exploring the possibility of playing one or more games in the spring.

The NCAA is allowing those teams who play a game in the spring to have 15 additional practices, and the Huskies are likely to take advantage of that.

Even before UMass announced it was returning right away, the Minutemen had visions of competing in the spring and had reached out to UConn about possibly playing a spring game. But with many other FBS programs opting for a fall return, the options for other spring contests were apparently drying up.

“At the end of the day, the fall time period was our best chance to get games played. So we shifted from where we were in the middle of August,” Bamford said.

Bamford gave coach Walt Bell and his staff credit for keeping the environment around the program “safe” since the summer and said the athletic department had performed just under 2,000 COVID-19 tests with only two positive results.

UMass has not announced any dates or opponents for its revised 2020 campaign but Bamford says he expects his football team play “probably at the most six (games). Ideally we’d be at least three or four.”

Bamford said his phone has been “ringing off the hook” with opponents looking for games since he signaled that the Minutemen would be playing games soon.

UMass’ first choices would be to play some of those it was already scheduled to face.

And of course there are those opponents, like UConn, who are limited by the fact that they still don’t plan to compete this year.