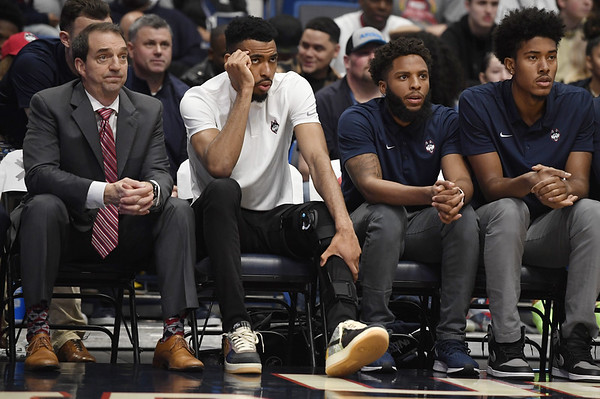 UConn's Tyler Polley, second from left, watches play from the bench with a knee brace after tearing his ACL | AP Buy this photo
Published on Tuesday, 18 August 2020 21:17
Written by NEILL OSTROUT

Tyler Polley is now just over seven months removed from that awful day in UConn basketball practice in which he tore the ACL in his left knee.

But the UConn forward says if the 2020-21 college basketball season starts on time, he would be ready to play.

“I’m on pace, for sure. I think if the season did start in November I’d be ready to play, to be honest,” Polley said Monday on a Zoom call with reporters. “My knee feels great.”

Polley tore the ACL and medial meniscus in his knee in a Jan. 10 practice in Storrs, just two days after he scored a game-high 19 points and pulled down 11 rebounds in a UConn win over Tulane.

The 6-foot-9 senior isn’t practicing fully with his teammates, yet, but says that’s more due to the COVID-19 pandemic that is likely to delay the start of the college basketball season.

“I’m taking it easy, taking it slow because we don’t really know when the season is going to start. There’s no reason to rush right now,” Polley said. “But I’m making great progress. Right now on the court I’m just putting up shots, not doing too much. But I’m getting there. It’s coming soon, trust me.”

Polley, like most of the Huskies, spent the late spring and early summer at home instead of campus. It made the rehabilitation of his knee that much more difficult, at first.

“It was super hard. At first it was pretty difficult,” Polley said. “When I first got home it was real tough. (UConn trainer James Doran) would send me stuff to do and I would do it myself. But as the months went along, I found a gym, a place where I could get some rehab in and some actual work in. It worked out.”

Polley said the final game he played as a junior, his dominant double-double against Tulane, is the kind of thing he expects regularly in the upcoming season.

“I feel like the last game is something I can do any game. I think I just took a different approach and played fearless,” Polley said.

UConn forward Isaiah Whaley has been impressed with all of the Huskies’ newcomers, perhaps none more so than 7-foot freshman center Javonte Brown-Ferguson.