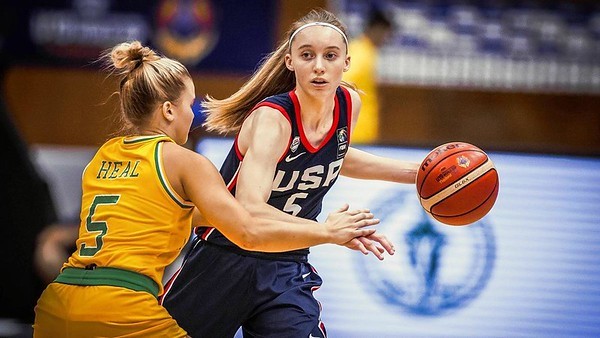 HARTFORD - UConn freshman Paige Bueckers marched for racial justice in her home state of Minnesota after the death of George Floyd and says she plans to continue using her voice for social change now that she's at Connecticut.

The 5-foot-11 guard, last year's national high school player of the year, is white. But her 7-year-old brother, Drew, is Black.

Bueckers said she's already had to talk with Drew, whom she describes as funny but a bit annoying at times, about issues such as how to conduct himself if he's ever stopped by the police.

“It sucks having to have those conversations with your little brother on how he should act because of his skin color,” she said Monday. “I'm scared for him. I'm scared for myself because that's my little brother. He's my best friend, really. I'm really close with him. Just having that fear of one wrong judgment and his life could be on the line is super scary and it's something I want to change."

Racial injustice is personal to many Huskies, the majority of whom are Black. They have been active on social media and as a team, they were among the first in the country to put out a statement in May, days after Floyd's death in Minneapolis.

“We are nauseated by the social injustice and police brutality that is reoccurring toward the Black community," it read in part. “So yes, we kneel during the national anthem. Yes, we are rioting. And yes, we are protesting because we are tired of innocent Black lives dying at the hands of police officers who do not care about our humanity.

For those who are not Black, silence is the biggest betrayal right now. The hardest part is watching friends who are not of color not even question what is happening right now. It’s time for us to start preaching togetherness, justice, and love amongst one another."

Junior guard Christyn Williams said it was important to the Huskies that the statement be from the players, not the coaches or the administration. She and a couple of teammates crafted it after getting input from everyone else.

“I just think it coming from a raw, personal place from everybody made the statement even more powerful,” center Olivia Nelson-Ododa said. “And I'm really proud of my team for being able to do that.”

Coach Geno Auriemma has given the players his full support and attended a march for racial justice near his home in Manchester. That was something Williams said meant the world to the Huskies.

UConn's players will continue to speak out during the season and have some ideas on how to do that, Williams said, declining to elaborate.

Bueckers said she understands there are those who disagree with their public stance. But she has a message for them as well.

“If I lost supporters because they don't agree with it, then I don't need those people anyway on my side,” she said.