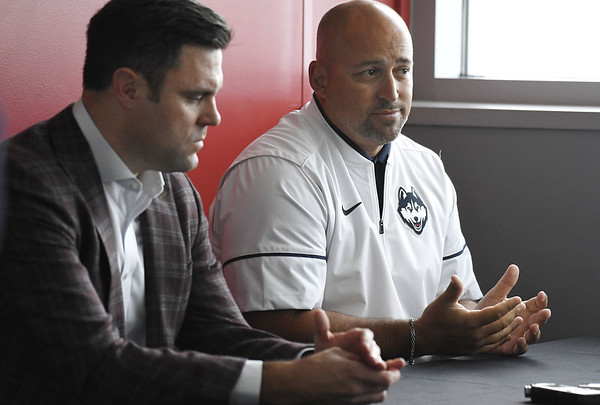 On that Saturday afternoon 55 weeks and two days from now, the UConn football team will return to action when it travels to California for a game with Fresno State.

With UConn’s decision Wednesday to cancel its 2020 football season due to the COVID-19 pandemic - the first FBS school to do so - it’s already wait till next year for the Huskies.

“Had we wanted to move forward, we could have played a full schedule,” UConn athletic director David Benedict said. “The number of calls, e-mails, text messages I’ve received the last couple of weeks inquiring about games, that would not have been a problem. However, it would not have looked the same as our schedule did entering the season.”

The Huskies were scheduled to open their season as an independent on Sept. 3 against UMass at Rentschler Field. But what was originally a 12-game schedule was already falling apart.

Games against Big Ten opponents Illinois and Indiana and FCS Colonial Athletic Association foe Maine were lost last month. The school added in its release that Mississippi of the SEC was off the schedule and that games against ACC teams North Carolina and Virginia were uncertain.

It will be the first time since 1943, during World War II, that UConn has not had a football season.

“Everybody had a say in it,” UConn coach Randy Edsall said. “But the guys who had the biggest say were the players. We heard them loud and clear and supported them 100 percent.”

The Huskies began spring practice on Feb. 4 and were one of the few teams in the country to complete it. They returned to campus on July 1 and no one has tested positive for the coronavirus, UConn officials said.

Members of the team will remain enrolled in classes, either virtually or in person, as full-time students at UConn. Team members will also retain access to facilities and support services in accordance with NCAA rules.

“Our players wanted to play, they were eager to play, they wanted to do what we had to do,” Edsall said. “But as we continued through this process, it became evident that we weren’t going to be able to do that, understanding the most important thing for us is that we look out for the health and welfare of the student-athlete.

“For me, it’s always been about the student-athlete. In my career, we’ve had a situation here where we lost a player to an act of senseless violence. Some of those things stick with you. These young kids, you’re their teachers, coaches, mentors. You’re their parent away from home. You have to make decisions that keep their health and safety at the highest level. Knowing we can control this situation, that’s what we did.”

UConn officials said they will be reaching out to season ticket holders in the coming days to explain refunds and other options.

Benedict hopes that the NCAA will allow players that lose their fall seasons due to the pandemic an extra year of eligibility, as they did when spring sports were canceled.

“Let me just say one thing,” Edsall added. “If I was the head coach in a conference, Power Five or Group of Five, I’d be doing the same thing, because these young men’s lives are more important than money. I’m just glad we made the right decision.”

UConn finished 2-10 a year ago - the wins coming against Wagner and UMass - including 0-8 in its final season in the American Athletic Conference.

Among those supporting the school’s move were former Huskies/NFL quarterback and ESPN analyst Dan Orlovsky and Sen. Chris Murphy (D-Conn).

“Emotionally this stinks,” Orlovsky said on Twitter. “But I get it with the schedule challenges and the burden placed on the players via protocol. Applaud them for making the best decision they felt for them.”

Murphy said in a statement: “UConn clearly made a tough decision today, but I am glad they did it in consultation with players, coaches and staff. We must put the health and safety risks associated with playing sports during a pandemic front and center in order to protect the athletes. I am a huge sports fan, and I was looking forward to the Huskies’ season. But right now, teams are facing unprecedented challenges and no matter what, the health, safety and well-being of the players and staff should be priority number one.”

The Big East, which the Huskies returned to on July 1, announced last month that six sports - men’s and women’s soccer, men’s and women’s cross country, women’s volleyball, and field hockey - will play only conference games.

No decisions about winter sports have been announced by the Big East or by UConn, but Benedict feels that like last spring and this fall it will again not be business as usual.

“If the present circumstances continue, I think it will be difficult to operate and play (basketball),” he said. “We’ve got 8,000 students coming back to campus the next couple of weeks. We’ve got to wait and see how that plays out. I have my fingers crossed that we’ll continue to be extremely safe on our campus, but that’s an unknown.”