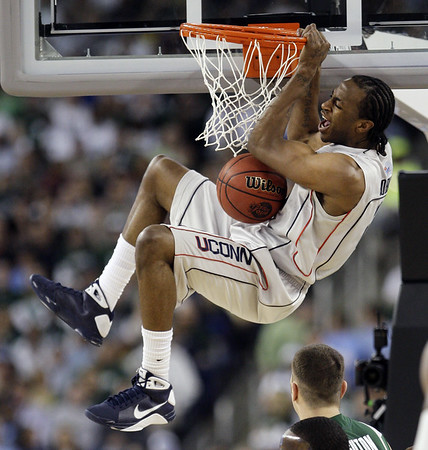 FILE - In this April, 4, 2009, file photo, UConn's Stanley Robinson dunks in the first half against Michigan State during a men's NCAA Final Four semifinal college basketball game in Detroit. The former UConn player died Tuesday, July 21, 2020 of unknown causes at a family residence in his hometown of Birmingham, Ala. He was 32 | AP Buy this photo
Published on Wednesday, 22 July 2020 20:06
Written by NEILL OSTROUT

Stanley Robinson, the 6-foot-9 forward who helped UConn to the 2009 Final Four and who was perhaps the greatest dunker in program history, died Tuesday at his home in Birmingham, Alabama. “Sticks,” as Robinson was known to family and friends, was 32.

“I am truly heartbroken,” former UConn coach Jim Calhoun, who coached Robinson in Storrs, said in a statement. “Stanley was such a beautiful person, caring and giving. He was a gentle soul, too gentle for this world.

“He was not only loved by his teammates, but everybody who met Sticks like him. He will always be a Husky.”

Huffman High School, where Robinson was the 2006 Alabama Gatorade player of the year, announced Robinson’s death Wednesday morning on Twitter.

“An autopsy was performed 7/20/2020 and the determination of cause and manner of death is pending toxicology results and microscopic studies,” Chief Deputy Coroner Bill Yates said, according to WVTM-TV. “There has been no evidence found to suggest trauma or foul play contributed to the death.”

Robinson scored 1,231 points for the Huskies, putting him No. 36 on the school’s all-time scoring list. He also pulled down 776 rebounds.

The ultra-athletic forward was best known as a dramatic and ferocious dunker.

“He was easily one of the best athletes I ever coached,” Calhoun said.

Robinson was on the business end of an alley-oop off a pass teammate Jerome Dyson threw from half-court in the Huskies’ 88-74 victory over No. 1 Texas on Jan. 23, 2010. That play remains imprinted on many UConn fans’ minds, and is one of the most impressive in the program’s history.

Among the games Robinson played in was UConn’s legendary six-overtime game against Syracuse in the 2009 Big East Tournament.

Robinson, who is survived by three daughters, was taken by the Orlando Magic in the second round of the 2010 NBA Draft. He never played in the NBA but played professionally in the D-League as well as in Canada, Chile and Iceland.