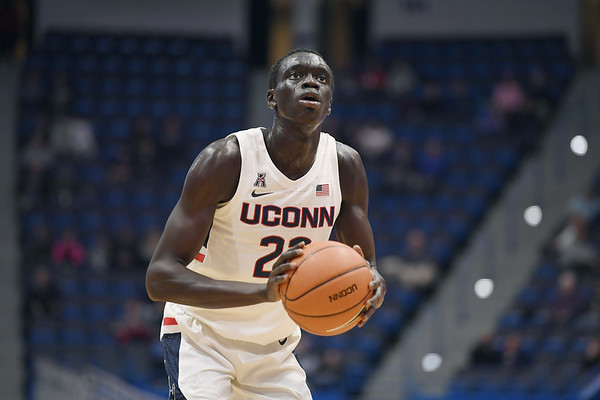 The vaunted 2019 recruiting class of the UConn men‚Äôs basketball team was quite a feather in second-year coach Dan Hurley‚Äôs cap.

It was ranked in the 18th-best in the nation by 247 sports, lauded by many long-time observers as perhaps the group that takes the Huskies back to the level their fans had become accustomed to.

It still might do that. But of the five newcomers who joined the program - Akok Akok, R.J. Cole, James Bouknight, Jalen Gaffney and Richie Springs - only one took the court in the team‚Äôs first scrimmage of the preseason.

One injured (Gaffney), one facing a quasi-suspension (Bouknight), one academically ineligible (Springs), and one forced to the sidelines by NCAA transfer rules (Cole).

Many of the absences were excused or expected, but not all.

The class shrank quite rapidly as the 2019-20 regular season approached for a variety of reasons, though the hopes for its success haven‚Äôt been diminished.

For starters, the Huskies knew all along that guard R.J. Cole would have to sit out the entire season after transferring from Howard. The high-scoring point guard will burst onto the Big East scene in the 2020-21 season, but he‚Äôll have to watch the Huskies through their final spin around the American Athletic Conference.

‚ÄúReally, really high level offensive player,‚Äù Hurley said of Cole. ‚ÄúHigh level in terms of just his ability to pass the ball on time, his feel for pick and roll. Offensively, he‚Äôs kind of got everything you want in a point guard.‚Äù

Bouknight‚Äôs status is of course the most confounding and upsetting to UConn fans. The New York native was arrested by UConn police in September after he allegedly drove, and crashed, a borrowed car, all without the benefit of a driver‚Äôs license.

He has been allowed to practice but Bouknight will be held out of game action for a period that Hurley has yet to reveal.

As for Bouknight‚Äôs basketball ability, Hurley says it‚Äôs off the charts.

‚ÄúHe oozes talent. He‚Äôs almost too talented for his own good because he plays in spurts. Because he‚Äôs so talented, he can just play in spurts and still just be really, really impressive,‚Äù Hurley said.

Gaffney sprained his ankle very early in the team‚Äôs workouts and hasn‚Äôt been 100 percent yet. He did play in the team‚Äôs exhibition victory over St. Michael‚Äôs but still won‚Äôt be where the coaches had hoped he‚Äôd be at this point.

‚ÄúWe thought we would be further along with the two freshman guards but because of injury and because of off-the-court, quite honestly going into the season we‚Äôre not getting as much out of this group as we hoped,‚Äù Hurley said.

Still, like Bouknight, Hurley admits he‚Äôs eager to see Gaffney at his peak in a UConn uniform.

‚ÄúHe can score, he can shoot it. He‚Äôs super athletic. Very, very smart, cerebral guy,‚Äù Hurley said of Gaffney. ‚ÄúI think he‚Äôs going to have a huge impact as well.‚Äù

Springs, who played at the MacDuffie School in Granby, Massachusetts with Bouknight, was a late scratch from the UConn roster because he wasn‚Äôt abler to get through the NCAA‚Äôs Clearinghouse. He had reclassified to attend college a year early but apparently couldn‚Äôt get his academics in shape fast enough and was deemed a partial qualifier by the NCAA.

Springs will be able to practice with the Huskies this year but won‚Äôt play in any games. When he does, however, the coaches believe the lanky forward will make an impact.

‚ÄúI think Richie is going to be the unsung gem of this class in a couple years when it‚Äôs all said and done,‚Äù Hurley said.

The only man to actually participate fully so far among the Husky newcomers is Akok. The 6-foot-10 Sudanese forward who grew up in New Hampshire arrived at UConn last spring ahead of schedule. Although he has yet to play in a regular season game, he has a leg up on his fellow first-year Huskies.

‚ÄúHe kind of looks the part of what everyone wants in today‚Äôs game,‚Äù Hurley said. ‚ÄúA tall guy with length and athletic ability that you could put on multiple people defensively, and that can space the floor for you.‚Äù

Akok, a likely starter for the Huskies right away, is already ‚Äúa presence on the defensive end‚Äù according to Hurley and a ‚Äúpretty good‚Äù perimeter shooter.

They may have different backgrounds but Hurley seems to see a bit of himself in Akok.

‚ÄúThe kid, he loves basketball. He‚Äôs passionate about his career,‚Äù Hurley said. ‚ÄúHe desperately wants to win and deliver UConn back to the level that it belongs at.‚Äù

The UConn newcomers as a whole, despite not being quite together yet, has put a little spring in Hurley‚Äôs step nonetheless. The quintet has already changed the way UConn practices and will change the way the team plays.

‚ÄúWe‚Äôre a deeper, younger team. It‚Äôs always fun going to practice. But the practices are just better this year because there‚Äôs a better understanding of what‚Äôs going to be expected, how they need to show up, the attention to detail, the energy level, the competitive level that we want from them. It‚Äôs all there,‚Äù Hurley said.

The preseason practices the Huskies went through may have been a little more fun for Hurley, but they‚Äôve involved quite a bit of teaching, too, especially for the new group.

The incumbent players, though talented as well, haven‚Äôt won much at UConn. With this influx of fresh faces, Hurley is hopeful he‚Äôs made the perfect mix to get the Huskies back to the NCAA Tournament - and perhaps beyond.