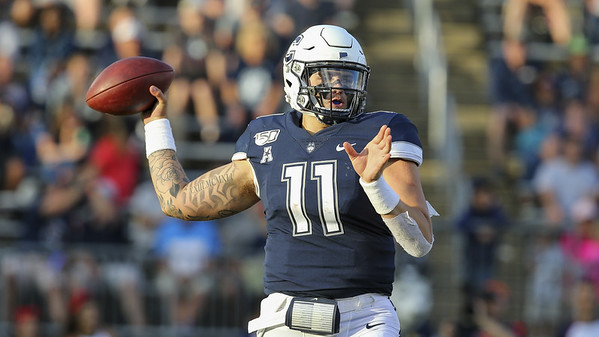 EAST HARTFORD - UConn football coach Randy Edsall has made yet another change at quarterback.

Freshman Jack Zergiotis, who started three games earlier this season, returned to that role Saturday in the 24-17 loss to Houston. Graduate transfer Mike Beaudry, UConn’s starter at the beginning of the season and for the last two games, was sent back to the bench.

“I just made the decision I thought (Zergiotis) was best for us going forward,” said UConn coach Randy Edsall, who had told reporters after the loss at Tulane on Oct. 12 that Beaudry would remain the starter. “I think I have enough credibility to watch film and watch things that go on to be able to make those kinds of decisions.”

Edsall said Zergiotis will remain the starter for Saturday’s game at UMass.

“He’s the quarterback. We’re going to live with him,” Edsall said. “If we get Steven (Krajewski) back, we’ll see where we go from there.”

Krajewski, who replaced Zergiotis in the first half at UCF after Zergiotis went 1-for-3 with an interception and two fumbles (one lost), is recovering from a shoulder injury but could return before the season ends.

On Saturday against Houston Zergiotis completed 27 of 44 passes for 270 yards with two touchdowns and an interception. But he missed a host of deep throws that could have resulted in big plays and was irked by that fact after the game.

“I have to get the ball to my guys and I couldn’t do it today. There were at least five opportunities down field where I had some guys open down field and I overthrew them,” Zergiotis said. “I have to get better moving on to next week.

“I’m always trying to drive it in there but I have to tilt my shoulder a little bit and give them time to adjust to it,” Zergiotis added. “I can’t be missing those.”

Edsall had a more creative way of describing exactly what he wants from Zergiotis on his long throws.

“He’s got to make the ball come down the chimney a little bit, put a little more air under it in certain situations,” Edsall said.

The Civil Conflict will continue. The Huskies have agreed to a game with Central Florida that will played in Orlando Nov. 20, 2021.

UConn is departing the American Athletic Conference at the end of this season but will keep its rivalry with UCF - oddly christened the “Civil Conflict” by former UConn coach Bob Diaco in 2015 - going for at least a while.

The Knights will not play a return game in East Hartford, but will pay the Huskies a $1 million guarantee for the home game.

On Saturday, UConn athletic director David Benedict said on 97.9-ESPN’s pregame show he has “solidified” 10 games for the 2020 season, UConn’s first as an independent.

An official announcement on who those opponents will be is expected to come as early as this week. The Huskies are already set to play UMass, Maine, Illinois and Indiana next season. Benedict still needs to find two more opponents to fill a 12-game slate. The Indiana, UMass and Maine games will be in East Hartford.

The UCF game gives UConn five opponents for 2021, joining Holy Cross, UMass, Purdue and Clemson, the latter of which has won two of the past three national championships. The Purdue and Holy Cross game will be at Pratt & Whitney Stadium.

UConn nose tackle Travis Jones was called for a targeting penalty late in the game after a hit on Houston quarterback Logan Holgorsen.

By rule, Jones was automatically ejected and will now be forced to miss the first half of this week’s game against UMass.

Edsall was not pleased with the call though television replays did appear to show Jones’ helmet making contact with Holgorsen’s, a fact that typically draws a flag regardless of the defensive player’s intent.