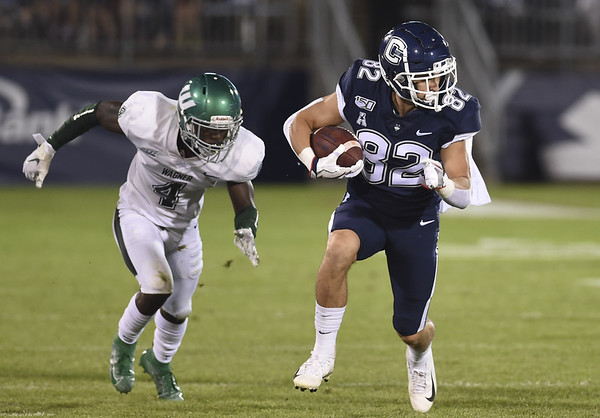 STORRS - There are plenty running back/wide receivers in college football. There are lots of linebacker/defensive ends. A couple of offensive linemen around the country double as fullbacks in certain short-yardage situations.

But as far as anyone can tell, UConn has the most unique “slash” in the sport.

The 6-foot-2, 203-pound junior from Allentown, Pennsylvania, has been exclusively a wide receiver for the vast majority of his UConn career, added a second job as the Huskies’ kickoff specialist last week.

Donaldson caught 16 passes for 225 yards and three touchdowns in 2017 as a redshirt freshman for the Huskies, but his role on the field since then has largely been reduced to special teams. He does have two catches for 30 yards this season, but he felt that he could contribute in other ways.

He was recruited to UConn as a kicker initially before giving up that to focus on playing offense. But he approached UConn special teams coach Eddie Allen prior to the Huskies’ game against Tulane about trying to add kickoffs to his workload.

“I saw that we kind of needed some help and we had a lot of people bouncing around,” Donaldson said. “I said to coach Allen ‘I still could do it if you wanted to give it a shot.’ ”

Even Donaldson admits he wasn’t sure what he was getting himself into.

“Tuesday of last week I went out there and tried it on my own, just to kind of see where I still felt. Because it’s been about four years since I let a ball fly,” Donaldson said. “I gave it a shot and it felt good.”

After nearly a week’s worth of practice, Donaldson thought he had performed well enough to earn the new job.

“I had a hunch. I was confident in myself and I felt I did good throughout practice,” Donaldson said. “Then when Friday rolled around, we were in the special teams meeting and he made the announcement.”

And against Tulane, Donaldson delivered right away with a touchback, a result Husky kickers Sean Young, Noah Iden and Clayton Harris were struggling to produce all season.

“He gave us everything we needed there,” UConn coach Randy Edsall said. “He goes in and kicks the first one into the end zone.”

That may have cemented the coaches thoughts on Donaldson’s permanent job application.

“He earned it based on what he did (in practice). Then he went out in the game and performed,” Edsall added. “We just have to see if he can be consistent.”

UConn hosts Houston on Saturday at Pratt & Whitney Stadium (noon, ESPNU) and Donaldson will again be kicking off, while also helping the Huskies a bit on offense and with other special teams.

It’s made his preparation time during the week a bit tight, but Donaldson isn’t complaining.

“I still handle all my receiver duties, go to all receiver meetings, film, still hang out with all those guys, except during the meetings in the mornings I leave a little early. I have to get out to the field, stretch, roll out, go through my old school kicking routine,” Donaldson said.

The move to take a wide receiver and making him a kicker may not be unique, but it’s certainly rare. But if you’re UConn and you’ve lost 21 straight games to FBS opponents, it’s not like there’s a great risk to make unorthodox moves.

There will likely be plenty, but Donaldson knows he’ll have at least one supporter of his new job in the Homecoming crowd in East Hartford this weekend.

Now that he’s in the dual roles, Donaldson is pretty sure he’s in a unique position nationally.

“Not that I know of. I think it’s kind of cool,” Donaldson said when asked if he’s heard of other kicker/wide receivers. “I just wanted to find a way on the field, try to help these guys and contribute where I could.”

Now that he’s contributing in a few ways, Donaldson has a vision of the perfect way to showcase his range of skills. It involves a score, a PAT and a kickoff.

“That was my actual goal coming into college. I had one goal. I wanted to catch a touchdown, kick the extra point then kick a touchback all in a sequence,” Donaldson said. “It’s a little far-fetched but I still have it in the back of my head.”

For now, Donaldson is not in the running to be UConn’s placekicker.  Harris will continue to do that even as Donaldson kicks off.

But “Slash” can still dream big.