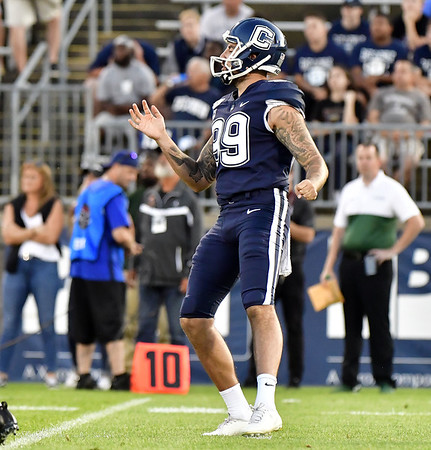 STORRS - Mired in a five-game losing streak and a multi-year skid of inefficiency, the UConn football team has changed its tune. Literally.

The acoustic accompaniment that the Huskies stretch to and work under during the first part of their practices is different these days. Their usual playlist of hip-hop sprinkled with a touch of country has been changed.

Now, it’s the opponent’s fight song that is played on a constant loop that fills the players’ ears.

This week, as UConn prepares for Saturday’s Homecoming clash with Houston, it’s the “Cougar Fight Song” blaring over the speakers in the Shenkman Center and on the grass fields near the Hilltop dorms.

It’s the marching band/instrumental version so the Huskies haven’t been serenaded with the lyrics - “When the going gets so rough and tough, we never worry ‘cause we got the stuff!” the tune goes - but in a tradition that began last week with the Tulane fight song, the Huskies aren’t exactly being taught to love these particular pieces of music.

“We have to start to develop an attitude when you play these teams, you don’t like them,” UConn coach Randy Edsall said.

For his part, the coach admitted he didn’t mind inserting something “instead of all this other music” that normally plays over the team’s sound system.

The switch in musical interludes is just one more thing the Huskies are trying to switch up.

“It’s a little different. But I think we need it. We need a change,” linebacker Jackson Mitchell said. “We needed to try to flip it around here because we’re in a slump right now. But I think we’re going to turn it around.”

The coaches wouldn’t mind the Huskies getting rather fed up with each fight song, so much so that they don’t want to hear it performed in celebration when the weekend’s game comes.

“I want us to make sure we have the right mindset,” Edsall said.