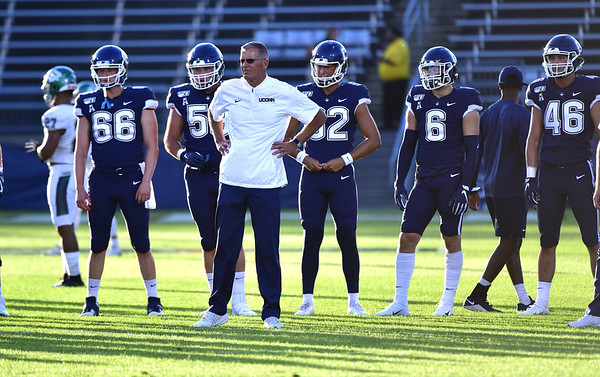 EAST HARTFORD - Often itŌĆÖs easy to play when youŌĆÖve got nothing to lose. There is a freedom in letting go, trying anything and everything because you already know the worst that can happen and youŌĆÖve accepted it.

ThereŌĆÖs another unwritten rule. You can be bad, if you must, but donŌĆÖt be bad and boring.

The UConn football team seemed to accomplish both on Saturday in its latest humbling defeat. The Huskies were again not good. And worse, coach Randy Edsall and company seemed to be ultra conservative when it wasnŌĆÖt necessary.

Rather than throwing caution to the wind, as one might think any team that has been as bad as the Huskies have been in recent years might do, Edsall and company became overly cautious.

Edsall, who has never exactly been a gambler in his coaching career, has at least adapted with the times and become more open to going against traditional, conservative thinking when it comes to his in-game decisions these days.

But in SaturdayŌĆÖs 48-22 loss to the Bulls - UConnŌĆÖs 20th straight loss to an FBS foe (its only victories in the last two seasons have come over FCS opponents Rhode Island and Wagner) - it looked Edsall circa 2005. Or maybe 1985.

The Huskies punted three times from inside the BullsŌĆÖ 44 on Saturday when the contest was still in doubt. They also punted on fourth-and-2 from their 44.

Each decision, taken on its own, is defensible and perhaps even reasonable. Taken together they are incredibly wrong, especially for this team.

ItŌĆÖs long past time for the Huskies to believe they can win games playing old-school football.

Do they have to pretend to be Boise State in the 2007 Fiesta Bowl against Oklahoma and run trick play after trick play?

Well, no, though itŌĆÖs doubtful fans would object. At least it wouldnŌĆÖt be boring.

ŌĆ£Some of it is how much time is left in the game,ŌĆØ Edsall said when asked about the punts in favorable field position. ŌĆ£What I try to do is just do what I think is best for our team. When itŌĆÖs fourth-and-12, itŌĆÖs hard to go for it, I think.ŌĆØ

HeŌĆÖs right, but itŌĆÖs also hard to accept moving the ball 17 yards as you hand over possession, too.

Trailing by two touchdowns, UConnŌĆÖs first possession of the second half ended when the Huskies punted from USFŌĆÖs 37-yard line.

Punter Luke Magliozzi, who has at times been UConnŌĆÖs best player, was unable to pin the Bulls back and instead his boot resulted in a touchback.

The visitors began to pull away immediately after, driving 80 yards in five minutes for a touchdown. USF quarterback Jordan McCloud hit a wide-open Bryce Miller from 12 yards out to make it 34-14 Bulls.

ŌĆ£I just go by the flow of the game and what I feel at the time,ŌĆØ Edsall said. ŌĆ£There were times I was going to go for it on fourth down and then we take a sack or we lose yardage. You put yourself in that situation and you say ŌĆśHmmm. ItŌĆÖs still early in the game and thereŌĆÖs still a lot of time left.ŌĆÖ I donŌĆÖt second guess any of that stuff.ŌĆØ

The Huskies did go for it on two fourth downs on their final drive of the game, leading to a touchdown, though that was long after the final outcome had been decided.

Edsall didnŌĆÖt bristle when asked about the punts the after blowing up at a much less innocuous question about future scheduling during his Tuesday press conference in Storrs. He was matter-of-fact.

And Edsall didnŌĆÖt get very fired up at the end of the game when USF ran a fake field goal with a huge lead or threw a touchdown pass on the gameŌĆÖs final play.

Maybe Edsall has come around to the fact that neither is the most egregious coaching sin by an opponent. Still, there was some thought that the postgame handshake between he and USF head coach Charlie Strong could be quite frosty.

Even Strong appeared to braced for the worst, but the fire from Edsall never came.

TheyŌĆÖre also not playing as if theyŌĆÖve got nothing to lose - though, in that vein, theyŌĆÖre being coached that way.