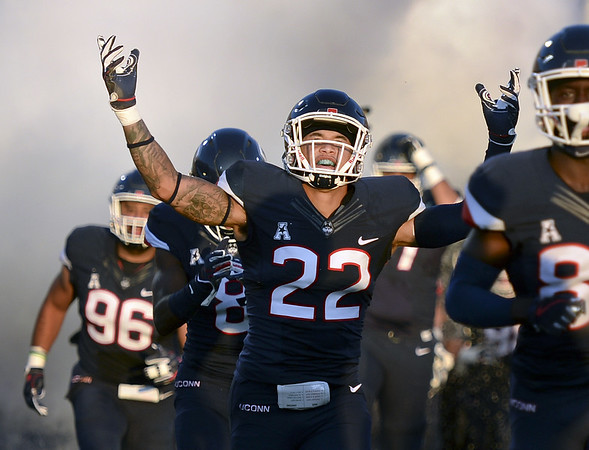 FILE - In this Aug. 30, 2018 file photo, Connecticut linebacker Eli Thomas (22) raises his arms to the crowd as his team enters the field for their season-opening NCAA college football game against Central Florida in East Hartford, Conn. After suffering a stroke last October, linebacker Eli Thomas’s football career is over. Connecticut head coach Edsall announced that Thomas will not be cleared to play football again. However, he will remain a team captain and remain with the program. | AP Buy this photo
Published on Wednesday, 18 September 2019 19:22
Written by Neill Ostrout

STORRS - Eli Thomas, who remains a UConn captain despite the fact his football playing days are over, might continue his athletic career in Storrs nonetheless.

Thomas, a linebacker who suffered a stroke prior to a team weightlifting session some 11 months ago, tried out for coach Jim Penders’ UConn baseball team this week.

There’s no word yet if Thomas, who ran track in high school, will officially join the baseball Huskies.

As for his time with the football team, UConn coach Randy Edsall says the senior from Elmira, New York, continues to be an inspiration.

“Eli’s been great. He’s been out on the field at practice, going up to guys and talking to them,” Edsall said Tuesday.

Thomas held out hope before the season began that he might play football again, but his doctors advised against it.

Still, he has remained with the Huskies through nearly every drill in practice and play on game days.

“Just his energy and his love to compete is something that is infectious,” Edsall said. “He was a guy that was basically a 1-man band trying to get that stuff changed around. As other people saw him they said ‘Wow! This kid is pretty special.”

UConn right tackle Matt Peart, who left the team’s loss to Illinois on the second play of the game with an injury and did not return, is likely to play this weekend against Indiana.

Peart, a four-year starter for the Huskies and one of the team’s captains, practiced Tuesday morning with seemingly no restrictions. He has started each of UConn’s last 38 games.

Indiana starting quarterback Michael Penix Jr. missed the team’s 51-10 loss to Ohio State but could return to face the Huskies this weekend.

Penix, a junior from Tampa, is battling an apparent shoulder injury that head coach Tom Allen told the Indianapolis Star was a “week to week” decision on whether or not the quarterback could play.

A bill recently passed in California would allow athletes to profit from their names and likenesses, something that goes against longstanding NCAA regulations.

Edsall, who has frequently called in recent months for players to paid, is clearly a proponent of such measures.

“It’s the right thing to do,” Edsall continued. “You get tired of seeing some of these things.”

Clayton Harris, who won a training camp battle with fellow redshirt freshman Noah Iden to be UConn’s starting place kicker, has made the most of his opportunity so far this season. Though he hasn’t been asked to attempt any kick longer than 35 yards yet, Harris is a perfect 4-for-4 on field goals.

Iden and Sean Young have taken turns handling kickoffs, but Harris seems to have the place kicking duties for the near future.

“He’s our kicker. As long as he continues to produce, just like everybody else, he’ll stay our kicker,” Edsall said. “Sometimes in practice he’s not as consistent maybe as you’d like but when you look at what he did in the game, that’s what you go by.”