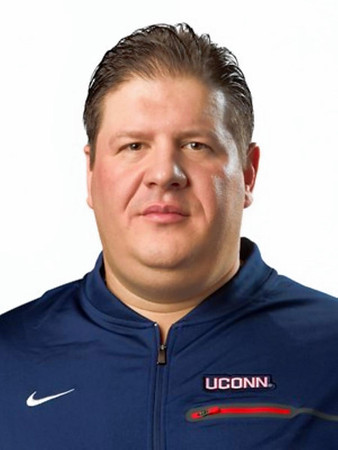 Frank Giufre made his debut as UConnŌĆÖs offensive coordinator on Thursday | UConn Buy this photo
Published on Thursday, 29 August 2019 19:28
Written by NEILL OSTROUT

Although much of the focus during the UConn football teamŌĆÖs offseason and preseason has been on the teamŌĆÖs new defensive coordinator - and rightfully so, given the task Lou Spanos is facing - the Huskies actually had two coordinators making their debuts Thursday night when they opened the 2019 season against Wagner.

Frank Giufre was promoted to offensive coordinator by head coach Randy Edsall following John DunnŌĆÖs departure for the NFLŌĆÖs New York Jets in February. ItŌĆÖs GiufreŌĆÖs first venture at any level in the role, and he called plays for the first time in his career last tonight at Pratt & Whitney Stadium.

So how has his first foray in the job been?

ŌĆ£How much gray hair do I have now?ŌĆØ the quick-witted Giufre replied.

A Syracuse graduate who had long stints as an assistant with the NFLŌĆÖs Indianapolis Colts and the University of Maine before arriving at UConn last season to coach the HuskiesŌĆÖ offensive line, Giufre swears heŌĆÖs having fun leading the entire offense.

The other members of the staff on his side of the ball and a good group of players have eased the transition, Giufre says.

The biggest difficulty has been immersing himself fully in the roster.

The position Giufre has taken over has been one of instability for the Huskies. The coaching profession, be it head coaches or assistants, is full of movement but Giufre is the fifth offensive coordinator the Huskies have employed in the last four years.

Dunn directed the Husky offense in 2018, Rhett Lashlee in 2017, and both Frank Verducci and David Corley spent time in the role during 2016.

ItŌĆÖs difficult to get a handle on what style of attack Giufre will employ, in part because itŌĆÖs his first time in the role. But he says he has a phrase written at the top of his call sheet that he borrowed from Bruice Arians, the Tampa Bay BuccaneersŌĆÖ head coach who worked with Giufre when the two were with the Colts.

ŌĆ£No risk it, no biscuit,ŌĆØ Giufre said, seemingly indicating that a conservative approach is not in the cards.

Although most offensive coordinators work from the press box on gamedays, Giufre says heŌĆÖll be on the sidelines tonight and throughout the season. He spent nearly his entire career as an offensive line coach and is used to being in the thick of the action.

His former allegiance to the line has caused Giufre a few hiccups during his preparation, however. He admits he has to ŌĆ£expand his visionŌĆØ when watching plays and games these days.

ŌĆ£For me itŌĆÖs been 19 years of, at the snap of the ball your eyes go right to the offensive line,ŌĆØ Giufre said, equating it to a right-handed person trying to suddenly be forced to brush his or her teeth with the left hand.

There is a sense among the players, on offense and defense, that things could be different this season.

ŌĆ£I think people are driven. They work hard and theyŌĆÖre driven,ŌĆØ quarterback Mike Beaudry said. ŌĆ£I wasnŌĆÖt with them here last year but you can kind of get that feel that nobody wants it to be the same.ŌĆØ

Playing for Giufre will be fun, Beaudry says, but more than anything else heŌĆÖs just glad to be playing against someone else tonight for the first time in 2019.

ŌĆ£IŌĆÖm kind of sick of seeing the same dudes on the other side of the ball,ŌĆØ Beaudry said. ŌĆ£ItŌĆÖll be cool to see a different color jersey.ŌĆØ