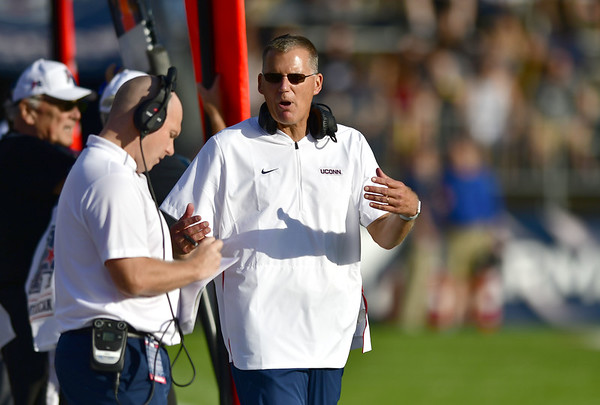 STORRS - The UConn football team, coming off one of the worst seasons in college history, is on the verge of beginning what it hopes will be a bounce-back year.

And as the Huskies prepare to face Wagner Thursday night at Pratt & Whitney Stadium in East Hartford, UConn coach Randy Edsall is being very secretive about his starting lineup and his team in general.

Many coaches are concerned about revealing too much information to opponents but few go to the lengths of of refusing to release a depth chart as Edsall has.

Virtually every major college football team in the nation has for decades released a weekly depth chart, sometimes called a two-deep, of probable starters and their backups at each position. It has become a useful tool for media and fans to get to know the roster of a specific team and anticipate who might be playing in a given game.

Edsall isn’t the first to go this route. Michigan coach Jim Harbaugh elected to go without a depth chart for a short period early in his collegiate coaching career, at one point leading an opponent’s sports information staff to construct a mock lineup of Wolverines and leading to some media outlets to file Freedom of Information requests for the two-deep.

Instead of producing a traditional depth chart, UConn distributed what it called a “participation squad” on Sunday. It was merely a listing of players by position who could play Thursday. All players not listed, Edsall later explained, are on what he is calling the developmental squad.

Edsall also revealed Sunday that he won’t be discussing players’ injuries. He cited an increase in gambling on his sport, though, combined with the lack of depth chart, it appears bettors and fans won’t have much information ahead of time on UConn should they choose to watch or bet on the Huskies this season.

“I’m not talking about injuries. There’s too much gambling going on now,” said Edsall, whose team was 1-11 last year, losing its final nine games. “I’m not going to talk about injuries all year long, unless I know a guys is out for the year.”

The only starter Edsall will confirm is quarterback Mike Beaudry. Edsall, who made that announcment last Thursday morning on Twitter, said the graduate transfer from West Florida has earned that job.

“It was really a tough decision but Michael ended up doing more things that we wanted to see than Steven (Krajewski),” Edsall said Sunday. “And Steven did a lot of good things. Mike just did a few more.”

Beaury’s experience at West Florida, where he helped the team reach the Division II national championship game as a junior in 2017, likely helped earn him the nod.

“He has experience playing before, and that’s one of the factors that you consider,” Edsall said. “But a lot of other factors went into it as well, stuff that people don’t see. How do they command the huddle? How do they command the operation of the offense? It’s not just completion percentage, number of interceptions thrown, how many sacks they might take.”

Beaudry has a different skill set than the man he is replacing, David Pindell, who set UConn records for rushing yards by a quarterback.

But it would be a mistake to consider one a “thrower” and one a “runner.” When Edsall was recruiting Beaudry, he said he thought about what he wanted in a quarterback.

“I want one that’s well-rounded. I don’t want one that’s one-dimensional,” Edsall said. “I think he showed on film that he was capable of doing a lot of different things.”

As for Beaudry, who was born in Canada but grew up near Orlando, Florida, he’s certainly happy to be in the position he’s in now.

“It’s unreal. I was excited. It’s really an honor, a blessing,” Beaudry said. “A lot of hard work has gone into it and I’m thankful they believe in me enough to be the starter.”