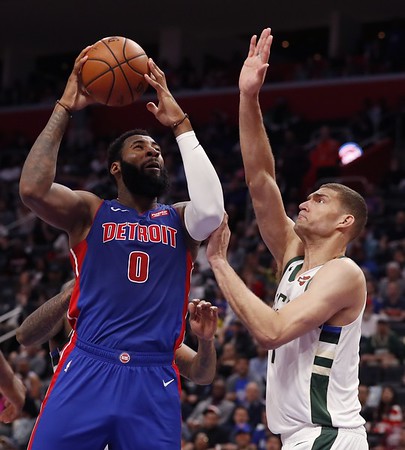 NEW BRITAIN - The evolution of the NBA has brought with it a devaluation of the ŌĆ£true center,ŌĆØ a rim-running, back-to-the-basket big man who spends nearly all his minutes gobbling up rebounds and banging down low in the post.

With guard-controlled ŌĆ£positionlessŌĆØ basketball defined by spread-out, three-point chucking offenses now the status quo, gone is the era of dominant traditional centers that ruled the 1980s, ŌĆÖ90s and decades before that.

Shaquille OŌĆÖNeal, David Robinson and Patrick Ewing have been replaced by Anthony Davis, Joel Embiid and Karl-Anthony Towns - versatile, agile bigs who have the athleticism to run the floor and spread defenses with pick and rolls before stepping out to consistently knock down threes.

ThatŌĆÖs why itŌĆÖs fascinating to see how players of the Shaq and Ewing mold are evolving their own game to fit into the new industry standard, and there may not be a more perfect case study in the effects of the center positionŌĆÖs ŌĆ£adapt or dieŌĆØ requirement than Andre Drummond.

ŌĆ£Every season IŌĆÖve adjusted. The game changes every year,ŌĆØ Drummond said. ŌĆ£IŌĆÖve always found ways to stay around and stay relevant. I try to do things throughout the summer to stay with the new era and style.ŌĆØ

Drummond, the 6-foot-11, 280-pound former UConn star and now two-time All-Star with the Detroit Pistons, was back in Connecticut on Saturday at New Britain High School for the 27th annual Osgood Shootout.

His comfortable demeanor was what you would expect for an NBA player participating in a more laid-back summer tournament, especially in a gym the former Middletown resident says ŌĆ£feels like home to me.ŌĆØ

He was smiling, laughing, energetic. But there still seemed to be a serious undertone for Drummond in certain moments. He knows he needs to change his game, and that desire was obvious during what would turn out to be his teamŌĆÖs only game in the single-elimination tournament.

After throwing down a dunk in pregame warmups to get the crowd hyped up, Drummond immediately stepped outside the perimeter for a long 3-point shot. Those shots kept coming in layup lines and didnŌĆÖt stop until his final 3-point attempt in regulation rimmed out prior to an overtime loss.

Nearly all of those 3-pointers misfired, and it wasnŌĆÖt surprising. Drummond clearly isnŌĆÖt there yet with his shooting stroke and may not be for a while.

His notoriously bad free throw shooting rose substantially over the last two years from a percentage in the 30s to hovering around 60 percent in 2017-18 and 2018-19, but the 3-point numbers still need work done.

Last season, his seventh in the NBA, Drummond started down the path of adding, or at least trying to add, a 3-point shot to his game, throwing up 38 attempts from three last season after having shot just 30 in his first six years combined.

The development of DrummondŌĆÖs shooting is clearly still in the early stages. HeŌĆÖs shooting only 14.7 percent (10-for-68) from downtown in his career and shot 13.2 percent (5-for-38) last season, but he knows growing that part of his game is mandatory if he wants to avoid becoming a one-dimensional player.

ŌĆ£The game is changing and I donŌĆÖt get away from what I know, but I still enjoy adding different things to my game,ŌĆØ Drummond said. ŌĆ£This year IŌĆÖve added a 3-point shot to my game, and IŌĆÖm able to bring the ball up the floor, which takes a lot of pressure off our guards. I did that as a kid, bringing the ball up the floor and passing more, and I make great decisions when I do have the ball.ŌĆØ

During the Osgood Shootout, Drummond did show some ball handling skills and demonstrated his passing. He still has a ways to go before he becomes the big man who consistently breaks defenders down off the dribble, stretches defenses with his shooting and shows range defensively, but itŌĆÖs all part of his process.

ŌĆ£My first couple years I was still banging in the post and doing all the nitty-gritty stuff,ŌĆØ Drummond said. ŌĆ£Over the years, itŌĆÖs changed to bigs being able to shoot more, move around the floor and be more agile, which is good for me because IŌĆÖm a very agile guy so IŌĆÖm able to guard anywhere from [shooting guards to centers]. It makes it really for fun for my team, and itŌĆÖs easy for me to still stay on the floor and be effective on both ends of the court.ŌĆØ

Even if those changes donŌĆÖt become permanent mainstays in his style, Drummond will never become completely obsolete. ThatŌĆÖs because heŌĆÖs cornered the market on rebounding.

He says itŌĆÖs because he wants it more. He has no issue with being physical, tough and getting hit every possession if thatŌĆÖs what it takes to control the glass.

He says he always knew he could be this dominant on the boards, and that goes back to a lesson taught to him by his old high school coaches, Pat Sullivan and J.R. Hargreaves.

Before Drummond left for UConn, those two told him to ŌĆ£find something youŌĆÖre really special at and perfect it,ŌĆØ Drummond said. ŌĆ£Obviously, IŌĆÖm not the greatest scorer in the world or the greatest shooter in the world, but IŌĆÖm tough and the rebounding is something that not too many people want to put the effort in to do. I went in and found that rebounding is my knack, and I just attacked it and became, I think, one of the best ever.ŌĆØ

Drummond is set to hit the open mark next summer and is projected to be the star of the 2020 free agency class, albeit a fairly weak one. If he maintains the same numbers heŌĆÖs put forth over the past handful of seasons and continues to be pull down rebounds, NBA organizations will still be willing to toss a max deal his way.

ŌĆ£IŌĆÖm not concerned about anything. I just play the game and let things happen,ŌĆØ Drummond said of whether thereŌĆÖs pressure to evolve his style of play heading into a contract year. ŌĆ£My game will speak for itself. The last contract I signed was a testament to that. My style of play is what my team is looking for, and IŌĆÖll get paid for it.ŌĆØ

Drummond will get paid, and if he keeps up production, heŌĆÖll go down as one of the greatest rebounders of all-time. But even if it simply means raising his 3-point percentage from 13 percent to 25 percent, Drummond will have to continue expanding his game. In todayŌĆÖs NBA, itŌĆÖs how he can become an all-time great big man and not just an all-time great board man.