UConn men's basketball's Gilbert out for AAC tournament due to injury 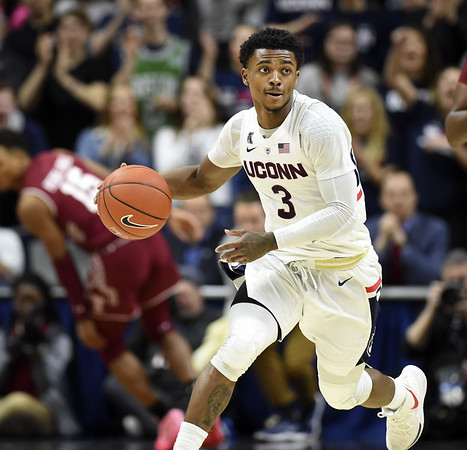 Connecticut's Alterique Gilbert (3) heads down the court in the second half of an NCAA college basketball game against Temple Thursday, March 7, 2019, in Storrs, Conn. (AP Photo/Stephen Dunn) Buy this photo
Published on Thursday, 14 March 2019 19:45
Written by Neill Ostrout

MEMPHIS, Tenn. - UConn was still down a guard when it took the court Thursday against South Florida in the American Athletic Conference tournament.

Huskies point guard Alterique Gilbert didn’t make the trip to Tennessee with his teammates and won’t be playing for the Huskies this week because of the injury he suffered last week in a loss to Temple.

Gilbert was hit in the face, apparently inadvertently, during a battle for a loose ball with the Owls March 7 at Gampel Pavilion. The sophomore suffered a concussion as well as a contusion near his eye. He was bleeding from his nose rather profusely soon after absorbing the blow.

“He took a heck of a shot,” UConn coach Dan Hurley said Wednesday. “If it was just a concussion or just an eye, but he’s got both going on.”

Hurley said he expects Gilbert to make a full recovery, but that it would likely take longer than the Huskies’ season lasts.

“He’ll be fine but he’ll take a heck of a shot,” Hurley said. “It’s not long-term, but probably a couple-week thing.”