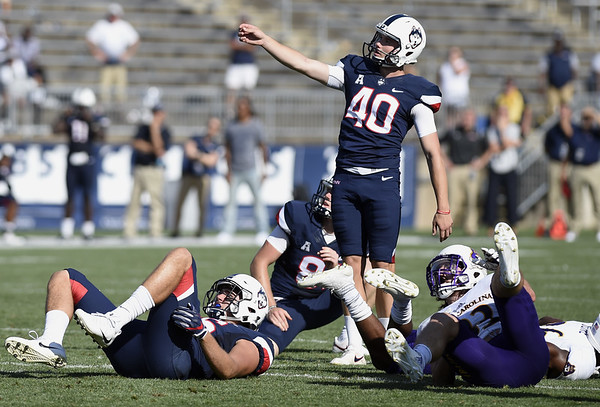 UConn placekicker Michael Tarbutt, top, watches as he misses a 35-yard field goal in the final seconds of the second half of an NCAA college football game against East Carolina, Sunday, Sept. 24, 2017, in East Hartford, Conn. (AP Photo/Jessica Hill) Buy this photo
Published on Wednesday, 11 April 2018 20:30
Written by Neill Ostrout

The rules of tackling, penalties, substituting, and other aspects of a typical Saturday clash are often modified and sometimes ignored.

But UConn coach Randy Edsall introduced Tuesday at the Shenkman Center an aspect of real game action that isn’t seen very often around the country.

He iced his own kicker.

During the final drill of his team’s practice, with kicker Michael Tarbutt attempting to boot a 41-yard field goal to end the workout, Edsall called a timeout.

He signaled to the referee standing just behind Tarbutt a second before center Brian Keating snapped the ball. After a brief regrouping and as the Huskies’ kicking unit lined up again, Edsall stopped Tarbutt again just seconds before the snap.

“He needs it. He needs it from a mental standpoint,” Edsall explained afterward. “He’s got to learn that when he goes out there certain things can happen.”

Judging by what happened the third time the Huskies lined up, when Edsall allowed the play to continue and Tarbutt’s kick bounced off the left upright, the coach was correct about his kicker needing it.

A junior originally from Grimsby, Ontario, who went to Canisius High School in Buffalo, New York, Tarbutt is the only kicker currently on the UConn roster.

Tarbutt is obviously very likely to be the Huskies’ starter again in 2018, so Edsall wants to make sure he’s more mentally ready for the role and he was in 2017.

“I’m going to try to do everything I can to mentally get him prepared for different situations that can arise,” Edsall said. “That’s Michael’s biggest problem. He just mentally doesn’t focus on certain things and block things out. He’s got the leg strength, he’s got all those things.”

Tarbutt made 12 of his 18 field goal attempts last season, his first as the Huskies’ primary placekicker.

He made all of his short ones, those less than 30 yards, and all of his long ones, all of his attempts more than 49 yards.

But Tarbutt connected on only six of his 12 attempts from between 30 and 50 yards, including one from 33 yards that could have sent UConn into overtime in its 41-38 defeat against East Carolina.

And there was his the dreadful extended-length extra point he missed against Cincinnati on the final snap of the Huskies’ season, which could have and perhaps should have sent UConn into OT against the Bearcats.

“He’s got to do a better job of focusing on one kick and just doing it, not thinking about things,” Edsall said.