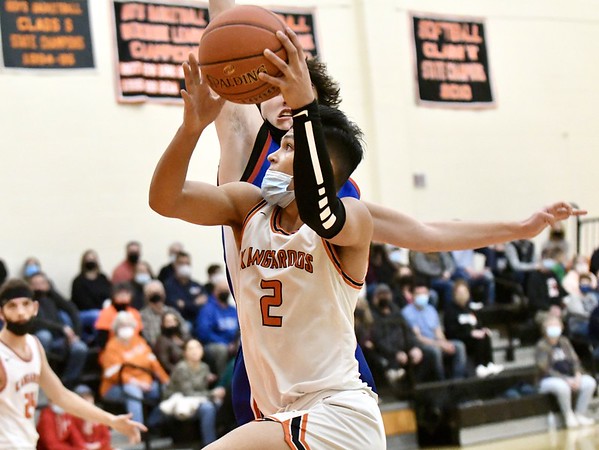 PLYMOUTH ‚Äï Terryville boys basketball put a stamp on their goal to repeat as Berkshire League champions, finishing their regular season with a 51-31 win over Nonnewaug.

Nonnewaug took the Kangaroos to overtime in their first meeting Jan. 21, but Terryville was in complete control this time as senior Dominick Dao posted 21 points in the first half to pull his team in front.

The win gives the Kangaroos a 19-1 record to finish the regular season and they will enter both the Berkshire League Tournament and Division V State Tournament as the top overall seed.

‚Äú[This] was a weird game because everybody was kind of locked in to our state seeding and league seeding,‚Äù Terryville head coach Mark Fowler said. ‚ÄúThe first time we played them was earlier in the season when first place was still way up in the air. They played physical with us, made some shots and gave us problems. This time we jumped out on them early and didn‚Äôt look back.‚Äù

Dao was unstoppable in the first half, drilling three three-pointers and making eight free throws as Terryville built a 14-point lead over the first two quarters. He scored all 11 of his team‚Äôs points in the second quarter and outscored Nonnewaug, which entered halftime with 16 points. His only second-half scoring was another triple in the third quarter as he sat for much of the second half.

‚ÄúWe were just playing together and moving the ball, everything just clicked for us,‚Äù Dao said.

Sophomore Branden Driscoll was the Kangaroos leading scorer in the second half and second-leading scorer for the game. He finished with 12 points after hitting two threes in the first quarter and was one of five Terryville players to score from long distance.

In addition to Dao scoring in bunches, the Kangaroos‚Äô defense ensured the Chiefs did not catch up. They held Nonnewaug to six points each in the second and third quarters while adding 14 points to their lead over that time.

Terryville led by 23 after three quarters with three different players hitting threes in the third period. Nonnewaug‚Äôs offense came alive in the final period to score 23 points, which more than doubled their total entering the quarter. Ben Roden scored 12 of his 18 points at the end as the Chiefs made a push but never came within 10 points of completing the comeback.

Up next for the Kangaroos will be the Berkshire League Tournament beginning Saturday.