Youth and speed flourishing as Terryville aims for another conference title 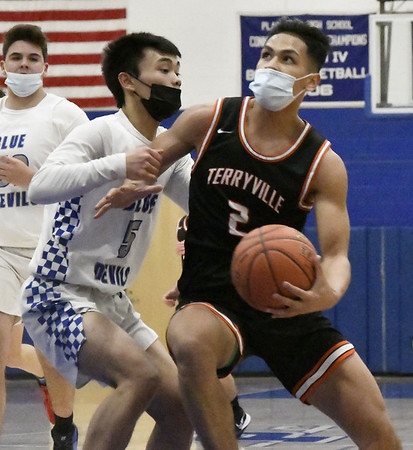 Dominick Dao (2) eyes the basket on a drive to the hoop Monday night against Plainville. | Tyler Hetu Buy this photo
Published on Tuesday, 28 December 2021 20:44
Written by TYLER HETU

PLAINVILLE - Terryville boys basketball moved on to 4-0 last night, rolling to a 65-40 win over Plainville.

The win, despite coming with a considerable cushion, did not see Terryville trot out the usual starting five that had helped them beat Litchfield, Shepaug Valley and Housatonic Regional through early and mid-December.

Fortunately for them they didn't miss a beat as young role players stepped up in the moment, playing big complementary roles to leading scorer Dominick Dao's 24-point night.

"We've been hit with a couple of vacations and sickness. I think we were down two or three starters tonight and a young group of sophomores stepped it up," said Terryville head coach Mark Fowler. "... We crashed the boards hard  and didn't turn the ball over and when you do that it's a recipe for winning."

The "recipe for winning" also included large helpings of speed and scrappiness, both of which were on display from start to finish. Terryville's ability to grab the rebound and instantly break out into offense to get a quick transition score to find either Dao, Jake Rinkavage or Charlie Rogers was something Plainville couldn't contain unless it constantly put pressure on them.

The pressing defenses came too late, though, as a lead quickly swung into Terryville's favor through the first 16 minutes of action.

Rogers scored 12 points while Rinkavage scored 11. Rogers, a sophomore, led all underclassmen in scoring for the Kangaroos.

"You look at our size, we're not very tall. It's speed and we're scrappy," said Fowler. "You get out and run and play naturally like that good things are going to happen instead of trying to do things that aren't to our advantage like slowing down and posting up. You've got to roll with what you've got and that's speed. We're going to run and gun and press when we can."

Going forward, the Kangaroos are hoping to retain their conference title from a year ago, but know the path won't be easy despite them playing well to open the season.

"Our goal is obviously is to try and retain our (Berkshire League Conference) Championship that we won last year. It won't be easy. There's a lot of good teams in the league that we need to improve to beat, but I think we're on track to doing that. We're coming together, we're playing good basketball but there's a lot of teams out there that are going to put us to the test. ... We keep playing the way we're playing we'll be all right."